Blockchain, Bitcoin, and Cryptocurrency are some of the terms that you must have heard at some point in your life. Especially in the past decade or so, cryptocurrency became the talk of the global economic forums. As many authorities began to question the future of monetary assets, money, and similar resources, cryptocurrency was among the more controversial topics.

In 2019, right before Blockchain could have seen a public acceptance phase, the revolution came to an abrupt halt. According to the Gartner Group, it was called ‘Blockchain fatigue.’ Other experts also jumped on the bandwagon that the fire of Blockchain technology and virtual currency, in general, has fizzled out. People thought maybe it was a phase after all that overstayed its welcome.

Pragmatically, the perspective is incorrect. According to recent statistics, the crypto market has an estimated total market capitalization of over $155 billion as of 15th March 2020. Considering these numbers and based on many financial institutions, powers might tend to disapprove of cryptocurrency, but they are in favor of Blockchain technology. The disruptive nature of decentralized currencies such as Bitcoin and others has led to a corresponding halt to its progress.

Let’s find out what more challenges do cryptocurrency has to face as the year 2020 goes by.

The following are the challenges hindering cryptocurrency growth and acceptance on a global scale.

There is no doubt about the fact that where cryptocurrency is facing the challenge of surviving and being accepted by the masses, Blockchain technology has already surpassed it. The masses have widely accepted it, and big names of global trade specialists are now moving towards Blockchain.

The likes of Trade Lens by IBM and Maersk’s joint Blockchain investment in the shipping industry have welcomed the first-ever initiative taken. Many such mind-blowing initiatives are underway that involve Blockchain apart from the cryptocurrency domain. The challenge for crypto-enthusiasts here is that once the Blockchain technology takes off without crypto, it will be the end to it. 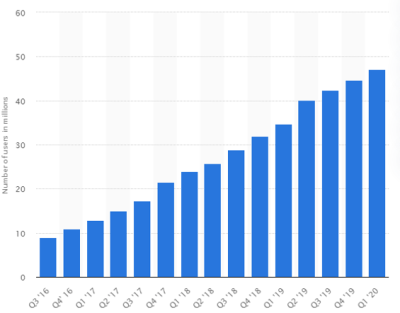 Cryptocurrency, even after having gone through a boom phase, still has a PR problem. The terms associated are enough to conjure up images of cringe advertisements, low-quality campaigns, bad actors, get rich quick schemes, and criminals alike. For many people, cryptocurrency spells out new technology for age-old scams and frauds, which they don’t want any.

It may seem like a petty issue, given the magnitude that is a cryptocurrency and the Blockchain industry. However, this issue has hindered crypto for years since its inception and will continue to do so if no knowledgeable individuals came forward in favor of it.

US constitution is known worldwide for its protection right given to the democratic entity that the country is. Freedom of speech, access to information, and the right to form an opinion is protected by the officials to be open. However, on the flip side, when it comes to assets and financial resources, our system laws, governments, and authorities are designed to keep it limited amongst the powerful.

It is evident why crypto and Blockchain has taken over a decade to adjust in an economy where it had to tackle issue arising from the core of how our economy and society operates.

a. Lack Of Legislation

Digital currencies are decentralized virtual entities. They are purely digital products, and our authorities are not geared to handle this advanced technology. That is why the lack of legislation regulating these digital currencies and providing any sort of user protection has become a huge challenge.

The essential step that needs to be taken to reduce the risk involves educating and informing people about keeping their personal data safe. There is still a gaping void where insurance and dedicated legislation needs to be placed. But until that happens, awareness to safely exercise crypto is crucial.

In addition to lack of legislation, the other big obstacle that stands in the way of cryptocurrency holders like Bitcoin traders and users is the challenge to spend their holdings. The untraceable nature of Bitcoin and its bad imagery as a mode of finance for mega criminal activities like terrorist attacks and the drug trade has made it quite scandalous in some countries.

Cryptocurrency is going through a period of abrupt halt where nothing much seems to be happening around the technology. Therefore, one can’t say for sure that what the future holds unless wide acceptability affects these legal obstacles standing in the way of crypto-trading.

Cryptocurrency faces implementation obstacles beyond the lack of regulation and inactive obligations. The technology is an emerging one and is still immature in a system where other options are widely scalable and accepted over it.

One might think how a technology that has been out there for over a decade now can be new and emerging. The reason is that not much has been done to expand it.

Interoperability or the ability of computer system software to exchange and utilize information is a challenge faced by Blockchain. The technology has been divided to make multiple uses of it in different industrial domains, separate form cryptocurrency.

The technology needs to be made interoperable for the internet dedicated to Blockchain and crypto exchange. Until then, as long as people continue to go by illegal and wrong means of mining it, the technology is a threat to the economic system that opens its gates to accept virtual currencies.

This point cannot be emphasized enough how difficult it is to buy and sell crypto. We are way in the year 2020, and it is still as difficult as it was back in the day when Bitcoin was first launched. The mere participation in the crypto world requires a nerve-wracking validation that general people find unappealing.

The security procedures are so complex that they have become hurdles in crypto adoption as a mode of exchange. Most students look for personal statement help UK who have a high interest in cryptocurrency markets but unable to compose a compelling profile.

It is still a significant challenge for the industry to create user-friendly processes for buying, selling, storing, and using cryptocurrency securely without being called out for it.

The generally acceptable country-wise currency exchange and even the banking transactions in different currencies have been made scalable and adaptable to the different rates. Cryptocurrency has years of effort to go until it finally reaches a scalability level that Dollar, Yen, Pounds, or Rupee have gotten to.

While interoperability may be a huge step forward to achieve that, that itself is a challenge to mitigate first, the system is so slow, and many dominant platforms for smart contractual applications are still under development. The processes face numerous delays and would require many scalable solutions to counter this issue of exchange.

Data has reached a level of becoming a digital asset at this point. Digital mafia considers data the real deal and a key to all things penetrable for the immense value it can hold for individuals and organizations. That is why one of the biggest lose loop in cryptocurrency is and will always be data rights and privacy.

The solution here is not just government protection of privacy and data for cryptocurrency traders. A dedicated system is required where such identities can capture and control their own data. And where there is a long way to go for an efficient framework, many initiatives have been taken and underway.

Blockchain might be immature, but it is so far advanced that it is more secure than a traditional computer system.

However, many financial breaches, data leaks, and huge losses due to the system vulnerabilities have made it challenging for people to be satisfied with their transactions. At one point in time, $250 million were lost in a single transaction through QuadrigaCX exchange due to its deadly centralized business model.

In addition to it being not secure enough, these pieces of news make rounds globally. People have lost faith in cryptocurrency over time.

In 2013, a crypto-enthusiast made a luxury car dealership in Costa Mesa, CA, for a Tesla Model S and paid for it in Bitcoin. Just under 92 bitcoins that were worth over $100,000 at that time, the deal was sealed and legally conceived. Considering this transaction and comparing it with the real-time value of crypto right now, the setback and skepticism surrounding Bitcoin have not done much harm to the growing estimation of it.

However, one cannot move past the real-time losses that have occurred given the Bitcoin transactions over the years. Spending Bitcoin is still a huge deal than hoarding it. Countries like Vietnam, Bangladesh, Bolivia, and Ecuador have prohibited crypto transactions. The state bank has outlawed it and declared cryptocurrency an illegal form of payment with a heavy fine due to violators. And even where it is legal, there are countless logistical issues.

Even in the United States, the Securities and Exchange Commission is having an ongoing debate if it prefers new regulations for the cryptocurrency market. If major countries with relevant economic forums stand against Bitcoin, it will become increasingly difficult for the crypto-type to gain acceptance from the masses as people continue to engage in it illegally.

Conversion remains a huge hurdle for Bitcoin vendors. As Bitcoin is not a fiat currency and is only limited to monetary value when converted to a cash equivalent, not many vendors go for its conversions for other cryptocurrency types. They are more willing to look for a payment method that delivers in Dollars or any other local currency. So that any exchange made for goods and products is made on consumer rates.

Such an implementation system is difficult even if bigger brands are willing to make it possible. No matter if a business sells cars or academic writing services, there is a lack of appropriate regulations to facilitate this type of exchange.

Though Bitcoin regulatory protocol was not affected and not a single Bitcoin disappeared or got lost, people lost loads of money. The downfall and cases of transactional breakdowns are the major reason why cryptocurrency came to an unannounced halt in the first place.

There is a serious need to regulate and change the trading and mining protocols in Bitcoin and other cryptocurrencies. Only then can I expect the general public to safely indulge in Bitcoin mining and trading without feeling it to be illegal or a complete daredevil gambling moves on their part.

The volatility of prices also hangs in the balance of the potential of Bitcoin and cryptocurrency in general. Even though Bitcoin has gained significant community following over the years, there have been disputes among the community member for deciding the path it should take.

The compact user base has made the currency increasingly volatile. The stability expected concerning a centralized authority system to regulate it will increase once people start to accept it. The doubts about Bitcoin’s usage and the resistance by major countries to integrate the system and legalize it will continue to deteriorate the prices further.

All in all, the results of no action being taken by major industrial giants, businesses, and government authorities have never been so altering ever since all these years of crypto trading and mining as it is now. The year 2020 is going to shape the cryptocurrency industry either for better or for worse.

Crypto networks like Bitcoin, corporations like Facebook, and nations like China implementing digital currency by the end of this year will be taking a step towards stumping Dollar as the record currency. It will, in turn, lead to the US Federal Reserve pushing ahead of the digital counterpart.

There is no denying that the stakes are high, and just like everything else, the future is unpredictable for cryptocurrency too.

Claudia Jeffrey is currently working as a Junior Finance advisor at Crowd Writer, an excellent platform to get assignment help UK. She is a self-proclaimed crypto-influencer. She has gained significant expertise and knowledge in this regard over the years and likes to share it with an interested audience.