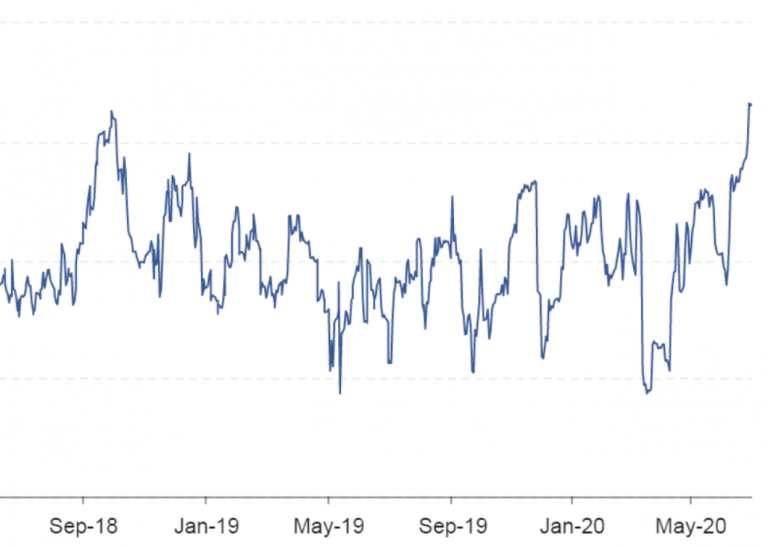 Ever since its inception, bitcoin has been dubbed “digital gold,” given it is durable, fungible, divisible and scarce like the precious metal.

However, while gold has a strong track record of rallying in times of stress in the global equity markets, bitcoin is yet to build a similar reputation as a safe-haven asset.

In fact, in recent months, the cryptocurrency has been increasingly correlated with the S&P 500, Wall Street’s equity index and benchmark for global stock markets. Now, data suggests that relationship is stronger than ever, likely denting its appeal as digital gold.

The one-month bitcoin-S&P 500 realized correlation rose to a record high of 66.2% on June 30 and stood at 65.8% on Thursday, according to crypto derivatives research firm Skew, which began tracking the data in April 2018.

“While bitcoin and S&P 500 correlation is always a very good indicator of market movement, it never really maintains a consistent position. Bitcoin behaves more like a highly leveraged position and follows the market trends in a more volatile, dramatic up and down swings,” said Wayne Chen, CEO and director of Interlapse Technologies, a fintech firm.

The one-month metric oscillated largely in the range of -30% to 50% for 12 months before rising to record highs above 60% on June 30. The data indeed shows that bitcoin’s correlation with the S&P 500 is somewhat inconsistent.

The one-year correlation has also risen to lifetime highs above 37%, according to Skew. One should note, though, that readings between 30% to 50% imply a relatively weak correlation between variables.

“Bitcoin, by all accounts, is still a risk asset. Despite those who may tout its fundamental similarities to gold, it has not yet proven to be a sufficient hedge or a flight to safety in times of risk-off sentiment,” said Matthew Dibb, co-founder of Stack, a provider of cryptocurrency trackers and index funds.

Risk assets are the those with fortunes tied to the state of the global economy. For instance, prices of stocks and industrial metals like copper tend to rise when the global economic growth rate is expected to pick up pace and falter during an economic slowdown.

Bitcoin has more or less behaved like a risk asset this year. The cryptocurrency’s price fell from $10,000 to $3,867 in the first half of March, as global equities cratered on coronavirus fears. It then rose back toward $10,000 in the following two months as the S&P 500 saw its fastest bear market recovery on record.

However, being treated as a risk asset may be a blessing in disguise for bitcoin.

“Given that the correlation between BTC and equities is still so high, our expectation is that this is only bullish for bitcoin price in the short term, as global markets benefit from an unprecedented amount of monetary stimulus,” said Dibb.

Indeed, the U.S. Federal Reserve (Fed) and other major central banks are injecting massive amounts of fiat liquidity into their respective economies to counter the COVID-19 slowdown. As of last week, Fed’s balance sheet size was $7.01 trillion – up 67% from $4.24 trillion in early March, according to data provided by the St. Louis Federal Reserve.

While bitcoin is struggling to establish itself as a haven asset, some investors remain undeterred.

“HODLers” or long-term holders of bitcoin, as gauged by the number of addresses storing bitcoin for at least 12 months, rose to a lifetime high of 20.3 million in June. That surpassed the previous high of 19.52 million reached in May, as per IntoTheBlock, a blockchain intelligence company.

“With the halving just recently complete, many holders believe that Bitcoin’s median price should be a lot higher than the current value. This creates more of a hodl type of behaviour until the market starts building steam again,” said Chen.

The metric set a new record high for the 12th straight month in June. Notably, the number of holders is up 22% year-on-year, even though bitcoin’s price is down 25% over the same period.

At press time, the cryptocurrency is trading at $9,110, having dipped to lows near $8,930 during the U.S. trading hours on Thursday.