In the month of August, ChainLink (LINK) wowed the crypto-verse by skyrocketing from approximately $8 to $20 in a span of two weeks. The surge in price was due to euphoria surrounding the LINK digital asset and its importance in the DeFi industry. Additionally, LINK marines heeded the call to liquidate Zeus Capital who had predicted that its value would drop to zero. The latter had stated that Chainlink is pure vaporware.

Additional Calls that ChainLink is a Bubble

As it turns out, Zeus Capital is not the only entity that believes that ChainLink is highly overvalued and its price would soon correct hard. A quick search of crypto-twitter believes that several crypto enthusiasts hold a similar opinion as can be seen in the tweets below.

Looks like the LINK pump and dump is entering its dump phase. LINK marines in disbelief, those twitter accounts that shilled LINK made tons of money and now noobs holding heavy bags! I always said Link was the new #XRP. Going to be fun watching noobs learn a hard lesson – @ercrypto741

$LINK sub-marines had 3 years to understand that $SINK is a pump and dump ponzi. I warned you! Now stay poor! – @greek_prick

Additionally, many who believe that LINK is a bubble cite that one reason to be cautious with Chainlink, is that 70% of the token’s supply is held by 9 whales. This fact has been highlighted several times as can be seen in the following tweet.

This fact has also been hammered down in a recent analysis by @CryptoWhale where he explains the following.

70% of the Coins Supply is held by 9 Whales…This is something that not a single ChainLink holder will tell you.

It frightens them greatly, and they have it in the back of their heads. Hoping that one day, the 9 people who hold 70% of the coins don’t dump on them.

To put that power into perspective, if those whales begun dumping now, they could crash the coin by over 99%, and it could be trading at under a cent.

I’m not sure how any investor is supposed to feel confident in a coin with such a terrible division of supply.

ChainLink Continues to Defy calls of a Bubble

Checking the charts, ChainLink (LINK) is once again trading above $12. At the time of writing, LINK is battling to overcome the $13 resistance zone and looks set to keep pushing till $14 in the days to follow. ChainLink’s current market action leads one to conclude that at least in the short term, LINK is defying all calls of a bubble and the project being vaporware.

Revisiting the daily LINK/USDT chart reveals that the token is once again trading above the crucial 50-day moving average. 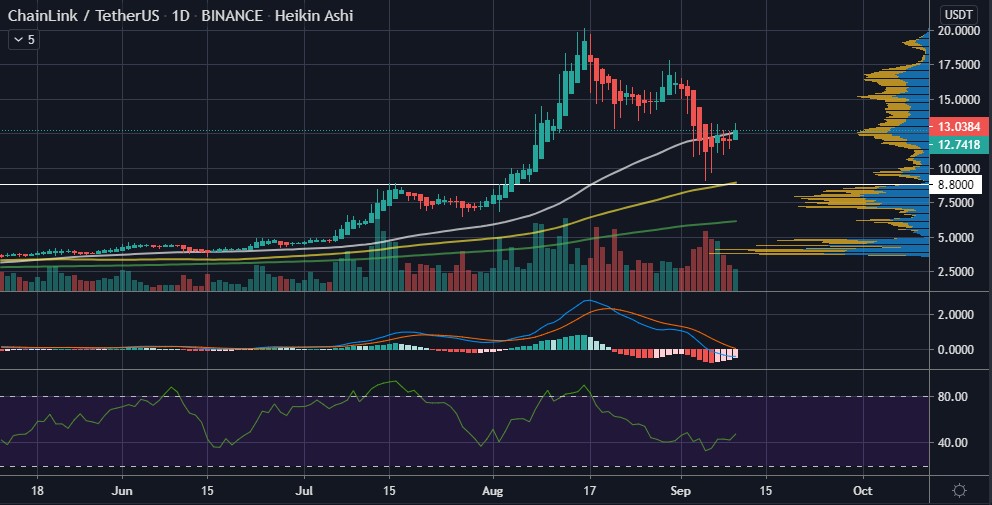 Furthermore, trade volume is the green with the daily MACD attempting to cross in a bullish manner below the baseline. The daily MFI is once again in neutral territory at 48 and could hint of a bullish few days for LINK as it attempts to break the aforementioned $14 level.

As stated in an earlier analysis, $8.80 is a crucial level to watch as it was the last all-time high set before the August push by LINK marines to liquidate Zeus Capital. If LINK were to correct hard, this area would provide a valuable line of defense for bulls.

As with all analyses of ChainLink, traders and investors are advised to use adequate stop losses when trading LINK on the various derivatives platforms.