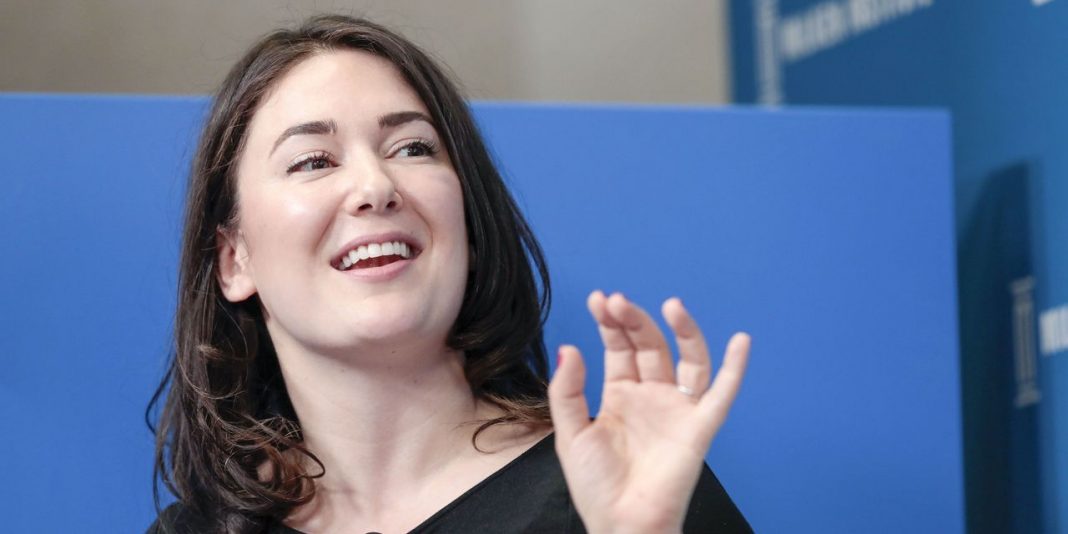 Bitcoin’s price is climbing again. The cryptocurrency started the year at about $7,000 and recently traded above $11,000. Barron’s spoke with Meltem Demirors, chief strategy officer at cryptocurrency investment advisor CoinShares, about what’s behind the rise, whether she expects it to continue, and what Bitcoin’s volatility means for its usefulness as a currency. Her edited comments follow.

On why Bitcoin’s price has been rising:
Meltem Demirors: There’s a lot of talk about currency debasement fueled by quantitative easing. We’ve also seen rallies in gold and silver and other traditional haven assets. Over the past six months or so, cryptocurrencies, particularly Bitcoin, have been placed squarely in that same narrative.

[There has been] a lot of growth in the options side of the Bitcoin market. Currently, derivatives volume is outpacing spot volume, which is very similar to what we see in gold, oil, and other commodity markets. There was a lot of pain in the options book. There were a lot of shorts that were trapped that needed to cover their shortfall. So what we saw is a cleanup in the market that sort of coincided with this breakout of Bitcoin.

We also saw a massive rally over the past two weeks and the early part of July in the “token” space–a lot of people were pouring capital into that space and taking profits and parking them in Bitcoin.

On cryptocurrency tokens:
Right now, there are a lot of people building financial products and services on top of these open financial networks like Bitcoin and especially Ethereum, the second-largest cryptocurrency platform after Bitcoin. One of the big trends is people creating opportunities for people to deposit collateral and to earn yield on that collateral. It’s basically like a giant decentralized risk market. That has caused an explosion of speculative activity and a rapid rise of capital pouring into this token space.

The interest on these accounts ranges from 7% to 35%. Some of them when they initially launched were as high as 100%. So you can imagine in a ZIRP [zero interest-rate-policy] environment, people are pretty excited. What we’re seeing is people chasing liquidity. As yields compress on a given platform, people move on to the next. This craze has actually been called “yield farming.”

These are highly liquid investments that trade 24/7, and what tends to happen is that traders see significant gains and then rotate into things like Bitcoin and Ethereum and other highly liquid assets to lock in some of those gains.

Get a sneak preview of the top stories from the weekend’s Barron’s magazine. Friday evenings ET.

On what gives Bitcoin value:
Bitcoin is backed by nothing but the demand for it. Obviously, there are communities that have very strong convictions about Bitcoin, which causes us to invest in it, and to build our careers in it, and to build firms around the asset. But Bitcoin is also a technology, and we’re seeing a lot of implementations of this technology, particularly on the trading side. The idea is that instead of relying on the correspondent banking system or these large monolithic platforms, what you can do is build an open, technology-driven software system. What cryptocurrencies are trying to do is transform the fundamental blocks that our financial system is built on—which I think has been long overdue.

On Bitcoin allocation:
I think it really depends on what you’re trying to achieve, but for most people a single-digit allocation, 1% to 3%, makes sense. Particularly if they have an allocation to gold—many people sort of characterize Bitcoin as gold for a digital era. If you look at the stock market in the U.S. today, the FANGs [
Facebook
(ticker: F),
Amazon.com
(AMZN),
Netflix
(NFLX), and Google’s
Alphabet
(GOOGL)] have gone from being 15% of the S&P 500 index to now 25%. So, we certainly see this trend of digitization across the investing spectrum.

On where to buy Bitcoin:
There are also a number of cryptocurrency exchanges. I use Gemini—a New York–based regulated crypto platform that also works with IRA institutions and advisors. Another platform that many people are familiar with is a company called Coinbase, which operates out of San Francisco. More companies are adding crypto capabilities to their platforms, too. Square, for example, will allow users to buy Bitcoin through their cash app. Robinhood allows folks to buy Bitcoin and other cryptocurrencies. And then
PayPal
has announced its intentions to also offer cryptocurrencies to their clients. So, generally, I think you will see Bitcoin becoming more widely available in the coming months and years.

On whether Bitcoin’s price will keep rising:
We’re not in the business of making such predictions, but suffice it to say, I wouldn’t be here building this business and speaking with you if I didn’t believe there was tremendous growth potential in Bitcoin as an asset class and this industry as a technology ecosystem. That doesn’t mean there aren’t challenges ahead. And, certainly, as we look at Bitcoin from an allocation perspective, it is still a risky asset. Historically, it has been volatile, although given the equities markets, I’m not sure that argument holds anymore because those have also been incredibly volatile.

Bitcoin is a store of value. One thing that is unique—which is why people liken it to digital gold—is the fact that it is digitally scarce. Once 21 million Bitcoins are produced, there will be no more Bitcoins [created]. Every four years, the amount of Bitcoins produced gets cut in half. So, at this point in time, we’re 11 years into the history of Bitcoin, and over 80% of all the Bitcoins that will ever be created have already been created. So I think that digital scarcity is part of what drives this price activity.

On whether Bitcoin is too volatile to be a currency:
I do think, as the coin ecosystem becomes more robust, that there’s going to be less extreme volatility. What I’d say to that is the currency that most people think and index in is dollars, for better or worse. And I don’t think that Bitcoin changes that. I really view Bitcoin as savings technology and as a financial asset. I don’t need to buy a coffee with my Bitcoin in the same way that I don’t need to buy coffee with gold—you don’t go to the coffee shops and chip off a little sliver of gold to purchase your morning coffee. So I would just functionally separate Bitcoin’s properties as a savings technology from this idea of having digital money that facilitates payments.