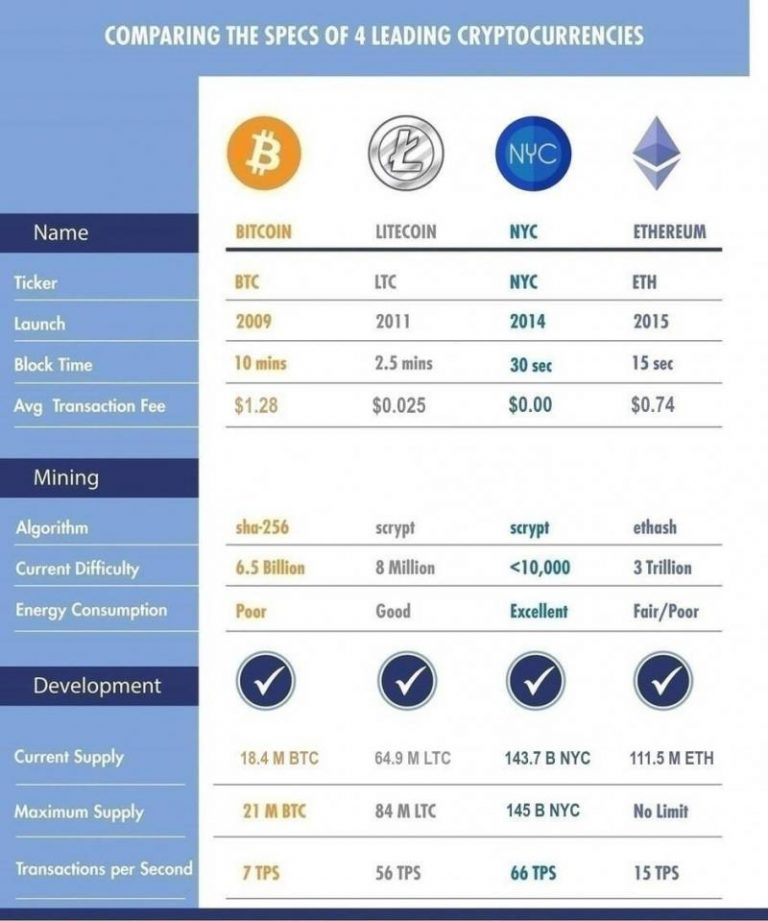 Bitcoin (symbol: BTC) is the original cryptocurrency that launched in 2009 by an unknown developer(s) using the pseudonym Satoshi Nakamoto. Bitcoin has a fixed block time of 10 minutes, meaning every 10 minutes a new block gets generated and is added to the existing blockchain. Irregardless of the amount being sent on the Bitcoin network, your transaction will take around an hour to get fully verified since the Bitcoin network requires 6 confirmations to be spendable, which is still very fast when compared to our current banking system. And Bitcoin’s transaction speed is among the slowest of any cryptocurrency. Most altcoins have developed their networks to be much, much faster. The average transaction fee on the Bitcoin network is now $1.28 which is also significantly less expensive than sending a traditional bank wire.
Ethereum (symbol: ETH) launched in 2015 and is the pioneer of smart contracts. All ERC-20 tokens, which can be created easily with just a few keystrokes, are layered on top of Ethereum’s blockchain and therefore are reliant upon its block time and fee structure for all transactions. ETH is one of the fastest cryptocurrencies and confirms transactions every 15 seconds. Fees to send funds currently average $0.74 on the Ethereum network.

Litecoin (symbol: LTC) was launched in 2011 by an ex-Google software engineer and is a fork of the Bitcoin blockchain. Litecoin lowered Bitcoin’s 10 minute block time to just 2.5 minutes, making transaction verification much faster and also significantly reduced fees to send funds on the Litecoin network. Currently averaging around $0.02 in transaction fees to send funds on the Litecoin network. Litecoin and New York Coin (symbol: NYC) are almost identical in technical terms. Both cryptocurrencies use the same proof-of-work scrypt hashing algorithm to verify transactions. Meaning they are both mined exactly the same way, using the same computer equipment to solve complex mathematical equations in order to verify a new transaction is authentic.

Most of you probably have never heard of New York Coin ( https://nycoin.net ), even though NYC Coin is an original open-source cryptocurrency that was launched back in early 2014. New York Coin is actually older than Ethereum, which launched over a year later. New York Coin is open-source code that was published at Github by an unknown developer(s) back when New York regulators were targeting the Bitcoin community and aggressively prosecuting Charlie Shrem, the founder of BitInstant. New York Coin is lightning fast, confirming transactions every 30 seconds, and is completely free to send and receive funds worldwide. Despite it’s name, New York Coin is not a regional coin. New York Coin is a free worldwide money transfer system as well as a no cost merchant services solution available to retailers worldwide. With a proven 6 year old blockchain and ongoing development. New York Coin currently has an undiscovered market capitalization hovering around $1 Million USD. Yes, you read that correctly, a completely free worldwide money transfer system that is currently valued at only $1 Million.

Between mid-2015 to mid-2017 New York Coin did not have a website or development team overseeing NYC Coin’s direction. In early summer of 2017, “scryptenthusiast” from bitcointalk forum registered nycoin.net domain name and rang the alarm. NYC Coin supporters worldwide quickly answered the call. Network nodes were quickly back up and running, mining pools were re-established and multiple block explorers were synced with the New York Coin network.

During the last Bitcoin “supercycle” to $20,000, NYC Coin market valuation skyrocketed to over $125,000,000 USD ($0.0012/NYC). A worldwide group of new supporters joined NYC Coin, established a new GitHub repository and began updating the original nycoin code and wallets. NYC Coin successfully implemented a hardfork on October 29th, 2018 that updated network security & stability replacing Kimoto Gravity Well with Digishield and implemented Aux-POW / Merge Mining. Block reward reduction was also implemented which has reduced inflation from block rewards (10,000 NYC pre-fork) down to 100 NYC, at time of this writing. With a final block reward halving scheduled for this upcoming December at block #7,000,000 that will further reduce New York Coin block rewards to 50 NYC.

New York Coin has recently been listed on numerous cryptocurrency exchanges including STEX, Exrates, SouthXchange, Tokok and HodlHodl. Additional exchanges are planned to be announced throughout 2020. New York Coin has weathered the storm. Survived when many others haven’t. Still standing tall. Original, decentralized blockchain cryptocurrency since 2014 with extremely valuable retail-level specs. The future is shining bright on New York Coin digital currency.

This release was published on openPR.