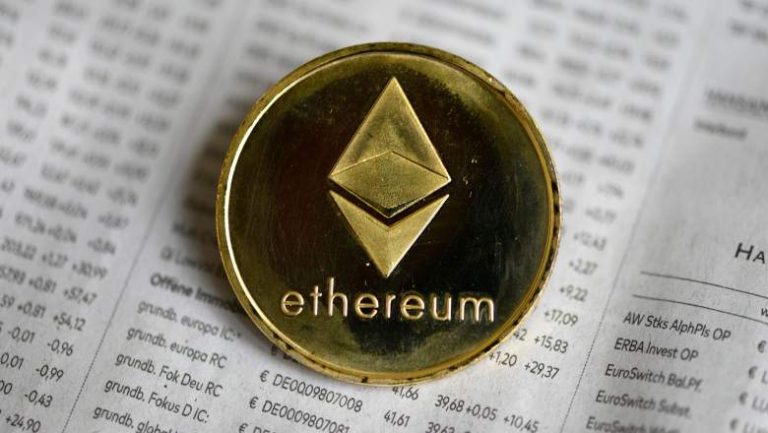 The photo shows a physical imitation of a Ethereum cryptocurrency in Dortmund, western Germany, on January 27, 2020.

A look at Coindesk’s price chart for Ethereum for the past week reveals a spike in price just over the last couple of days. The coin was priced below $240 at the beginning of the week and now it’s up to $286.22 as of the time of publication. The difference is even greater when viewed for the last month, when the coin was at a low of about $220 on June 28. The coin’s price is now just slightly above its highest price for the past year, which occurred on February 14 at about $284. Of course, this is all much lower than its pinnacle in 2018, when the coin hit $1,405 in early January 2018. Many cryptocoins dropped in late 2017/early 2018.

Ethereum is the popular blockchain for stablecoins, which has led to the Ethereum blockchain moving more value a day than Bitcoin, Decrypt noted. So positive stablecoin announcements will also have a positive effect on Ether’s price.

On July 22, Visa announced that it was expanding to support new forms of commerce, including fiat-backed digital currencies known as stablecoins. Visa noted that these digital currency wallets would support all of Visa’s capabilities, including Visa Direct. One of Visa’s recent innovations involved a research team working on Zether, which is an Ethereum smart contract.

Bitcoin’s price has also increased recently, according to Coindesk. It hit a high of $9,638 on Friday and has shown an overall steady increase in price all week, after starting around $9,160. Bitcoin’s prices are volatile, seeing highs and lows over the past three months. The price doesn’t currently match its price from nearly a year ago when it reached nearly $12,000 in early August 2019, but it’s grown a lot since it dropped to just below $5,000 in mid-March, 2020. Bitcoin’s highest price was in late 2017.

Here’s a look at what Ether is, according to Coindesk:

Ether is the cryptocurrency built on top of the open source Ethereum blockchain, which runs smart contracts. The cryptocurrency acts as a fuel that allows smart contracts to run unlike bitcoin, which is meant to be a unit of currency on a peer-to-peer payment network. Ether’s supply is not capped like that of bitcoin and its supply schedule, often described as minimum necessary to secure the network, is determined by members of Ethereum’s community. A majority of decentralized applications are based on Ethereum and the cryptocurrency accounts for the highest percentage of the total funds staked in the DeFi projects. Ethereum is scheduled to make a transition to proof-of-stake mechanism from the current proof-of-work mechanism in the later half of 2020.

READ NEXT: The latest COVID-19 deaths, cases, and updates