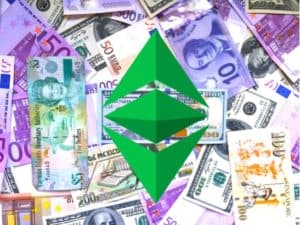 The number of transactions performed on the Ethereum network doubled in the last six months to around 1.23 million transfers every 24 hours.

It’s possible that as the Ethereum network keeps growing, and transaction fees keep rising (which they have been), we might see many projects move to other blockchains. For instance, Tether (USDT), the world’s largest stablecoin, was initially issued only via the OMNI blockchain which runs on the Bitcoin (BTC) network. However, the stablecoin was later moved to Ethereum because transaction fees became too high.

When Ethereum transaction fees also continued to increase last year (and in 2020), some Tether (USDT) holders decided to move the stablecoin to the Tron (TRX) network, which is not as congested as Ethereum.

Tether’s USDT stablecoin was launched on Tron when ETH transaction fees were only about $0.14 (in July of 2019). At present, the median Ethereum transaction fee is $3 and the average transaction costs are nearly $6, as of August 14, 2020.

The Tron network has now issued about half or 50% of the amount of USDT and may issue more of the leading stablecoin, given that Ethereum transaction costs keep rising.

USDT has also been issued on the Algorand, Bitcoin Cash, EOS, and Liquid networks, however, they’re still a very small percentage of the USDT on Ethereum and Tron.

Decentralized finance (DeFi) applications such as Compound (COMP) and MakerDAO are also increasing the load that the Ethereum blockchain must handle. However, Ethereum, the world’s largest smart contract platform, is preparing for a major system-wide upgrade, called Ethereum 2.0 (ETH 2.0).

This will involve a transition from the current proof of work (PoW) based consensus model to a proof of stake (PoS) blockchain consensus algorithm. It’s quite possible the ETH 2.0 update will be able address scalability issues that Ethereum is currently facing.

The blockchain or distributed ledger technology (DLT) space has also grown considerably since  Ethereum was first introduced more than 5 years ago. There are many more ecosystem participants that regularly use Ethereum and provide feedback.

For example, the developers of the SKALE Network, which aims to complement the capabilities and functionality of Ethereum, have pointed out that Ethereum 2.0 might be a step in the right direction, but could potentially have some “fatal” flaws that need to be addressed.

In addition to higher transaction fees, the ETH price surged to a 2-year high of around $430. But the number of active Ethereum wallets fell to a 67-day low, according to available data. This seems to suggest that many traders or investors may be trying to keep their holdings, instead of selling them, because they’re anticipating the ETH price to increase further.

During the historic bull run of 2017, Ethereum had surged to over $1400 but then came crashing down to below $100, briefly. The extreme volatility of crypto-assets makes them a very high risk investment which has led to many people losing their life savings.