DeFi token transactions continued to congest Ethruem’s network as Etherscan showed that addresses related to Uniswap had guzzled a significant amount of Gas over the past 24 hours. At the time of writing, Ethereum’s charts pointed to a likely drop. While on-chain metrics made a strong case in support of an Ethereum slide, it must be noted that traders’ sentiment toward the crypto-asset has been positive. Further, Compound and IOTA continued their bearish trend as IOTA’s mini-rally ran out of steam. 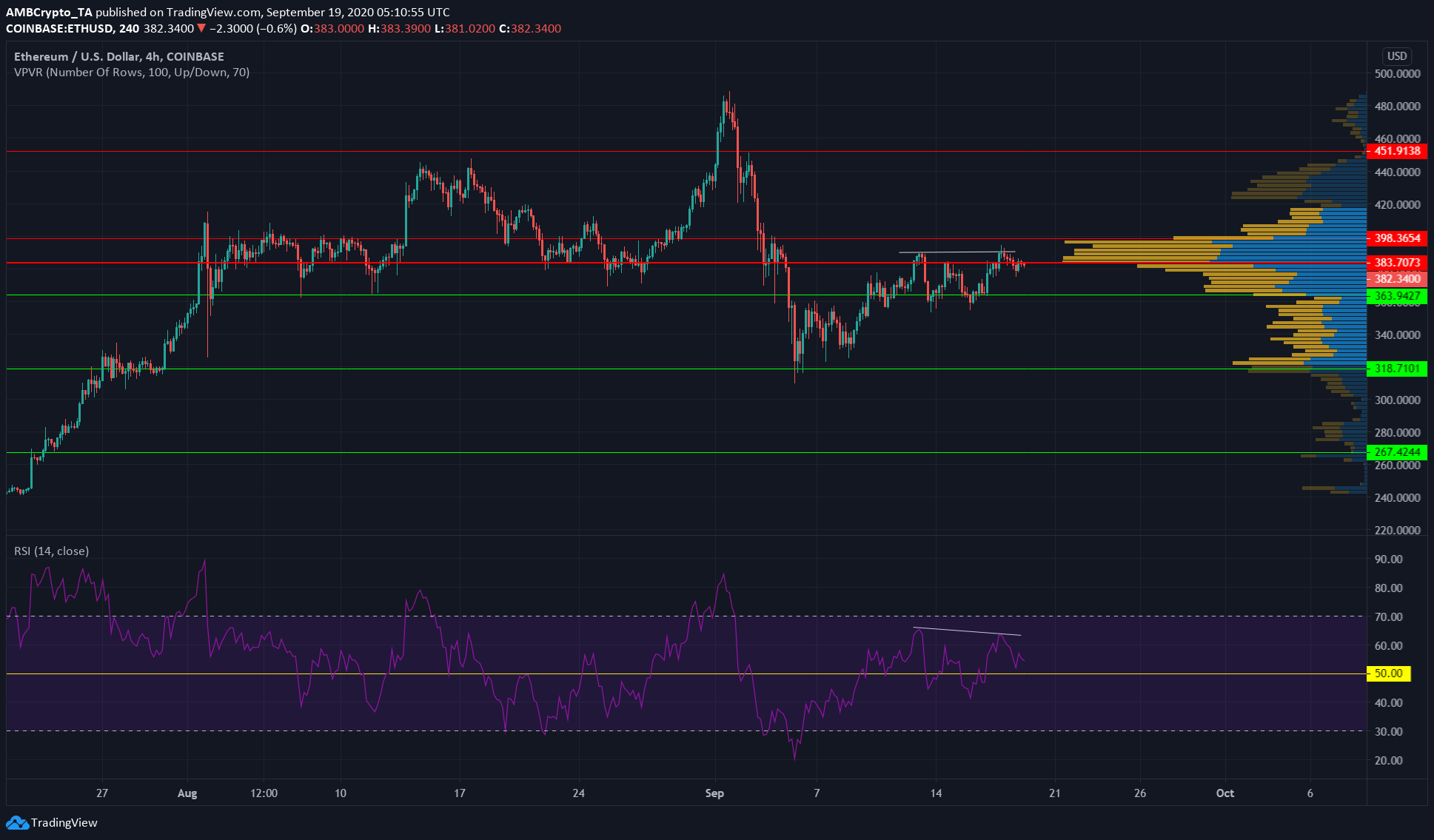 Ethereum was trading at a price of $382, at press time. The VPVR showed that the Point of Control (PoC) for the asset lay at $383.7. Further, ETH was facing significant resistance from $382 to $400, with the VPVR showing significant trading activity at these levels recently. The order book impedes a quick surge of the crypto-asset through this price zone.

As far as other indicators are concerned, the RSI showed a value of 55, at the time of writing. While the RSI noted bullish momentum for most part of the week, a weak bearish divergence was also seen.

The price had reached a ceiling, while the RSI formed a lower high, as highlighted by the white lines. This could forecast bearishness in the short-term for ETH and see it drop to find support at $363.

In other news, the US-based cryptocurrency exchange Coinbase Pro announced that they would be passing on Ethereum gas fees directly to customers. 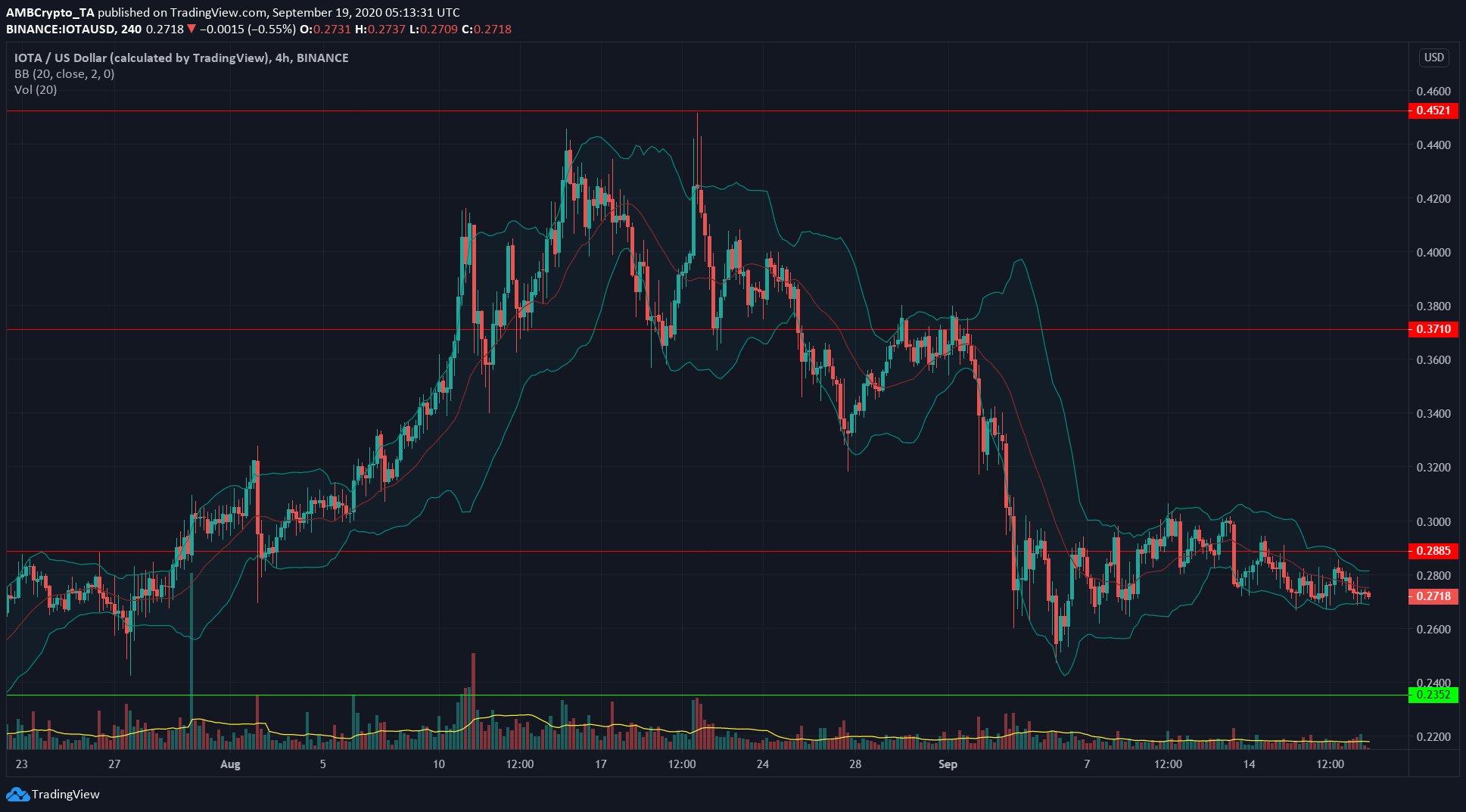 The Bollinger Bands had tightened around the crypto’s price, indicating falling volatility in the price movement of IOTA. This usually implies a period of consolidation for the crypto-asset.

In fact, the past few days also did not see a trading session with extraordinary volume and no breakout to either side had been achieved, by press time.

In other news, Jakub Cech, Director of Engineering at IOTA Foundation, recently released a development update that detailed the progress of Chrysalis (IOTA 1.5), Bee, and Hornet, among others. 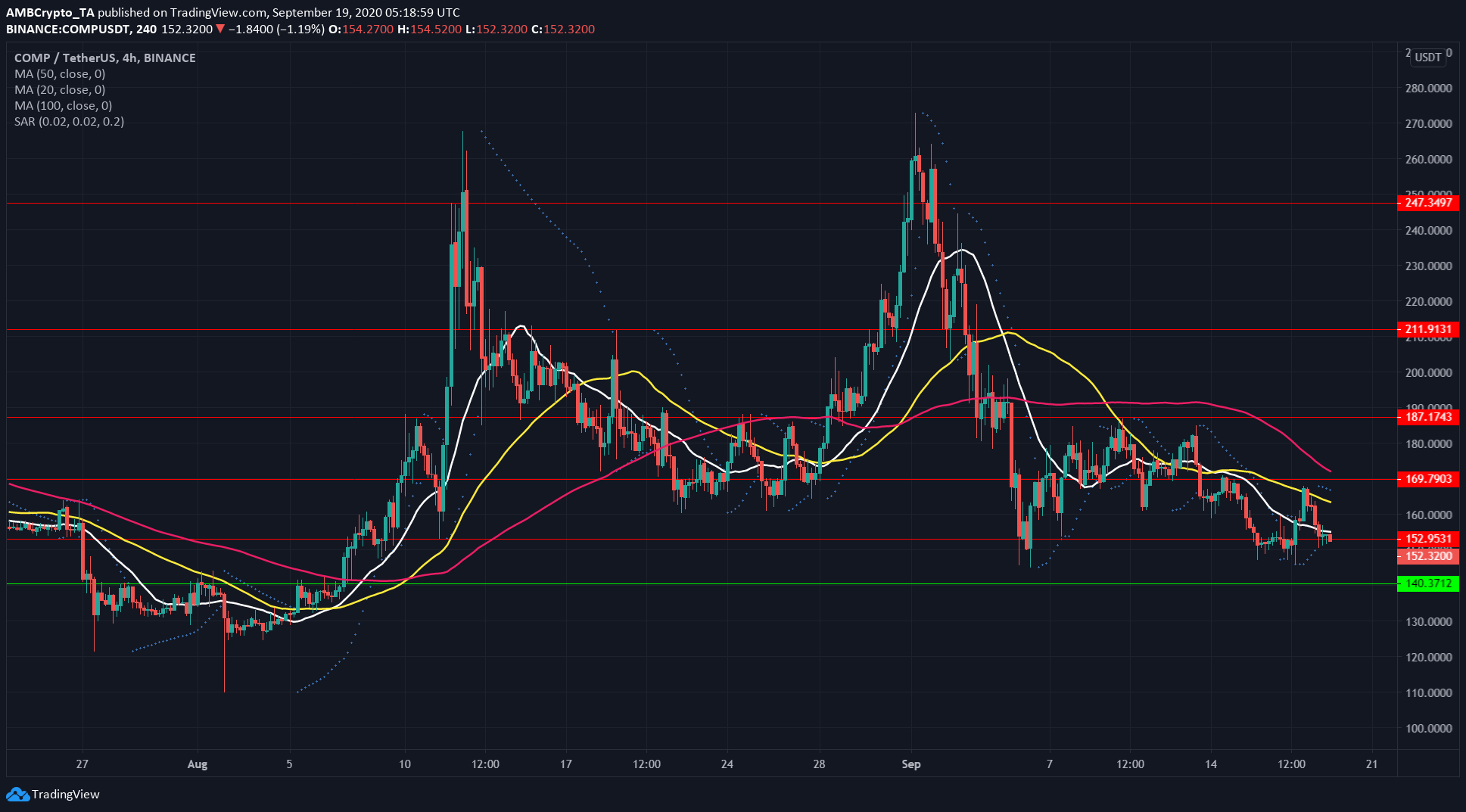 COMP’s charts highlighted bearishness in the short to medium trend as the 50 SMA (yellow) crossed under the 100 SMA (pink) last week, while the 20 SMA (white) crossed beneath the 50 moving average over the past couple of days.

The 50 SMA had also acted as resistance over the past week, with the price continuing to set lower highs. While the price did break beneath the support level at $152.9, the trading session had not closed, at the time of writing.

The Parabolic SAR also gave a sell signal and it appeared likely that COMP would slide to find support at $140.

Compound continued to hold the 7th rank on DeFiPulse with a total value locked of $703 million.