Crypto Currencies Trading Explained | reviews | News | Trade for the future with cryptocurrencies
Home Crypto Currencies Ethereum Five Years of Ethereum: From a Teenage Dream to a $38B Blockchain 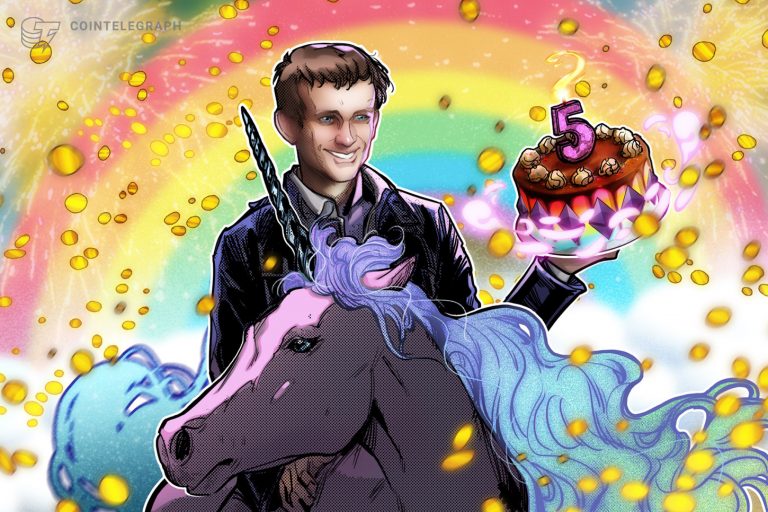 It would seem that five years is a relatively short time for an information technology company, but Ethereum has made colossal progress during this time, growing from its own initial coin offering project to the largest blockchain platform, running about 2,000 decentralized applications. Today, the market capitalization of its native cryptocurrency, Ether (ETH), is worth $38 billion — larger than Ford Motor Company and the popular app Snapchat. Not only that, but the value of Ether has seen a 121-fold increase over the period of the network’s existence.

While the whole team is preparing for the transition to the proof-of-stake consensus algorithm ahead of the upcoming Berlin upgrade, Cointelegraph recalls the striking changes that have occurred to the platform over the five years since its launch, and the failures that have only toughened its resolve.

Ethereum was invented by Vitalik Buterin, a Canadian programmer of Russian descent. It was 2013, and Buterin was just an 18-year-old teenager, but his idea found a lively response in the global blockchain community. Later, Gavin Wood, a British computer programmer, proved the possibility of creating the system invented by Buterin and described the basic principles of its operation in the Ethereum “Yellow Paper.” Together with the first members of the Ethereum team, they launched a crowdsale and raised $18 million for the project’s development.

The first version of the Ethereum cryptocurrency protocol, called Frontier, was launched on July 30, 2015. But the security level the system boasted back then was far from what Ethereum is today. The launch of Frontier marked an important milestone in the history of the network, after which the developers immediately started working with smart contracts and creating DApps on the real blockchain.

The first existing historical record of Ether’s price is from Aug. 7, 2015, when ETH was added to the Kraken crypto exchange at $2.77 per coin. Over its first three days of trading, its price dropped to a demeaning $0.68, most likely under the influence of rapid sales by early investors.

In the second half of the year, droves of crypto enthusiasts rushed to learn what they could about Ethereum. A particularly significant contribution to its popularization was made by the DEVCON-1 developer conference, which was held from Nov. 9 to 13. The event sparked intense discussions on the development of Ethereum, with the participation of representatives from IBM, Microsoft and UBS.

2016: The DAO, hackers and Ethereum split

At the beginning of 2016, the price of Ether rose rapidly, fueled by news of the upcoming launch of a network protocol with a more stable version: Homestead. As a result, ETH reached its first serious high of $15 per coin on March 13, with the platform’s market cap exceeding the boastful $1 billion mark. On March 14, Homestead went live, which made its blockchain officially secure through new protocols and network changes (EIP-2, EIP-7 and EIP-8), making future updates possible.

More specifically, the network protection became based on mining, which was planned only for the initial stage of development with subsequent transition to PoS with a hybrid model at an intermediate stage. At the same time, exuberant requirements for video memory acted as protection against the use of ASIC miners.

The next event, which brought the price of Ether to its highest value that year — $21 — was the widespread media coverage of the dizzying success of The DAO project, which raised more than 12 million ETH ($150 million at the time ) in May. The DAO — an acronym for decentralized autonomous organization — was one of the pioneers of the upcoming ICO era and chose Ethereum as its launchpad to raise investments.

However, on June 16, using a vulnerability in The DAO’s code, unknown hackers stole about $60 million in ETH from the project. News of the attack sliced the price of ETH in half to $11. Buterin offered to return the stolen funds by conducting a hard fork to restore the network to its pre-attack state. Following a controversial hard fork held on July 20, the network split into two: Ethereum and Ethereum Classic.

On Sept. 22, Ethereum suffered another blow: The network was subjected to a distributed denial-of-service attack, significantly slowing its operations. The news became an impetus for the beginning of a local downtrend in the curbed price, which began consolidating in the $7–$9 range by the end of the year. Two unplanned hard forks were then carried out to improve the resilience of the network and rectify the consequences of the DDoS attack.

Ether’s price experienced a meteoric rise at the start of 2017 as the cryptocurrency was added to the eToro platform on Feb. 23. Around the same time, the number of unconfirmed transactions on the Bitcoin network had reached 200,000, causing an increasing number of crypto investors and miners to opt for Ether as an alternative investment. On May 6, the price of ETH set a new bar of $95 per coin.

The popularity of Ethereum grew rapidly in the crypto community and among DApp developers. The initial coin offering hype also contributed to the increased demand for Ether, as thousands of projects opted to fundraise in ETH. By Sept. 1, the price of Ethereum had almost reached a whopping $400, but news of China banning ICOs and crypto trading quickly slashed it to nearly $220.

The price gradually recovered by mid-October after the release of the Byzantium network upgrade, which took place on Sept. 18. Along with the growth of the ICO bubble, in which Ether was still the main means of payment, ETH reached nearly $800 by the end of the year.

The beginning of 2018 turned out to be even more successful for Ethereum than the previous one. On Jan. 13, the price of Ether reached its all-time high of around $1,400. But the ICO rush, which had triggered the rapid growth of Ethereum’s price in 2017, came to an end. Throughout 2018, its echoes played a cruel joke on Ether as thousands of ICO projects sold their savings, meaning that ETH dropped even faster than the rest of the market.

In early September, news of the Constantinople hard fork — expected in November — slowed the drop in the price and injected positive sentiment into the community. However, the network upgrade was delayed. Influenced by inter-bearish sentiments on the crypto market and pending updates, the price fell to $85, dropping from the second-largest to the third-largest cryptocurrency by market capitalization behind XRP.

Many aspects spiraled out of the control of developers over the year as they were actively engaged in conducting technical work on the network. Meanwhile, the community lost count of the number of upgrades carried out. In January, the technical roadmap gained clarity as difficult engineering problems were solved and the Ethereum development community continued to grow.

DeFi became the largest sector within Ethereum, and the market saw early signs of growth in gaming and decentralized autonomous organizations. At the beginning of 2019, the only DeFi protocol with significant funds was MakerDAO, which had a total of 1.86 million ETH ($260.4 million at the time). The playing field became much more diverse by the end of the year when new participants rushed into the industry.

On Feb. 28, the Constantinople hard fork took place on the Ethereum network, which prepared it for the transition to the Casper PoS protocol and the abolition of the previous mining model. However, the eighth upgrade, called Istanbul — which initially had been scheduled for Dec. 4 — was delayed and activated on the Ethereum mainnet on Dec. 8.

Among the main objectives of Istanbul were ensuring the compatibility of the Ethereum blockchain with the anonymous Zcash (ZEC) cryptocurrency and increasing the scalability of the network through SNARKs and STARKs zero-knowledge-proof protocols. In addition, the update made it difficult to carry out denial-of-service attacks on the network due to the change in the cost of gas needed for launching operating codes.

The progress of Ethereum 2.0 laid the foundation for the world’s largest corporations to start using the Ethereum blockchain. In July, Samsung released a software kit for Ethereum developers, six months after it was revealed that the development of its new phone included a built-in Ethereum wallet. Another large partnership involved internet browser Opera, which had launched an Ethereum-supported Android wallet at the end of 2018 and announced a built-in Ethereum wallet for iOS users in early 2019.

Meanwhile, Microsoft continued its involvement with the Ethereum ecosystem. In May, the company released the Azure Blockchain Development Kit to support Ethereum development. In October, it backed a tokenized incentive system from the Enterprise Ethereum Alliance for use within enterprise consortiums. And in November, it launched Azure Blockchain Tokens, a service that lets enterprises issue their own tokens on Ethereum.

In the first half of 2020, Ethereum — famous for its numerous conferences and meetups — was forced to postpone all activity due to the coronavirus pandemic. Nevertheless, the team managed to make significant progress in solving the scalability issue, with the launch of the final Ethereum 2.0 testnet scheduled for Aug. 4.

The developers hope that once the upgrade is complete, the Ethereum network will become faster, cheaper and more scalable without compromising decentralization and network flexibility. Meanwhile, the blockchain network continues to grow, as activity in the decentralized finance market has increased significantly.