It would be impossible to venture into the crypto space for long without eventually running across one of the oldest and most reputable coins in existence – Litecoin (LTC). Litecoin is an open-ѕоurсe рееr-tо-рееr digital cash system similar to Bitcoin. Importantly, Litecoin was developed to improve on some of the shortcomings of the world’s first succesful cryptocurrency, Bitcoin. To this extent, Litecoin has also been labeled the ‘silver’ to Bitcoin’s gold by many in the sector.

Litecoin was one of the earliest cryptocurrencies to enter the market. Consequently, it remains one of the largest coins in the sector based on market capitalization. This hugely popular coin can be found on nearly every crypto exchange. Also, it’s one of the most widely accepted cryptocurrencies in the world. You can use Litecoin for purchasing goods, services, or even investing in other crypto projects as they emerge.

Like most cryptocurrencies, Litecoin utilizes blockchain technology to remain decentralized. Decentralized currencies differ from traditional fiat currencies in many ways. Primarily, they are not issued from a central authority such as a government. Instead, Litecoins are produced via a сrурtоgrарhіс рrоtосоl. Officially, Litecoin’s are released under MIT/X11 lісеnѕеѕ.

How Does Litecoin Work?

Litecoin functions in a manner very similar to Bitcoin. In fact, this online payment system was directly inspired by Satoshi Nakamoto and his release of the Bitcoin protocol. Many people are surprised to learn that Litecoin was one of the earliest Bitcoin forks in the market. As such, this cryptocurrency is technically almost іdеntісаl tо Bіtсоіn, albeit with some crucial differences.

LTC’s developer, Charlie Lee began his Litecoin project by borrowing the core code from Bitcoin. He then made several important modifications to the protocol. One of the main upgrades he introduced was the reduction of the block approval time from 10 minutes down to 2.5 minutes. Just like with Bitcoin, these blocks contain the next batch of transactions awaiting approval.

The block time reduction gave Litecoin more scalability than its predecessors. Notably, LTC is now 4x faster than Bitcoin in terms of transactions per second (tps). Lee also adjusted the transaction fee model within LTC to make it more appealing to the masses. Specifically, Litecoin’s fee structure is 1/50th the size of Bitcoin.

This fee structure is one of the main draws to the platform. Amazingly, it only costs 1/1000 of a LTC to process a transaction. This miniscule fee doesn’t change depending on the size of your transaction either. You pay the same amount regardless of its size. This strategy provides a huge upgrade to the current market leaders. For example, PayPal charges a 3% fee for every transaction conducted within their network.

One of the main draws to Litecoin, and cryptocurrencies, in general, is their finite supply. Unlike fiat currency, which governments can print at will, Litecoins are only produced at set intervals following the approval of a block of transactions to the network. In total, there will only ever be 84 million Litecoins produced. Interestingly, this amount was the result of simple calculations on the part of the developers.

Basically, developers decided that since Litecoin processes transactions at 4x the speed of Bitcoin, it would be wise to provide the network with 4x the tokens. Critically, this fixed amount of coins also means that inflation will not affect the overall value of the currency as time progresses. The more time that goes by, the more value that each Litecoin should hold. As of today, there are already over 65,177,458 Litecoins in the market.

Many traders view Litecoin as a more sustainable option within the market. Their views are not without reason. For one, LTC often experiences less volatility than its big brother Bitcoin. Also, the development team behind this project is a bit more advantageous than Bitcoin’s development team. Specifically, LTC developers have proven their desire to remain technological ahead of the competition time and time again. The platform was the first to add the Segregated Witness update.

Litecoin’s epic rise to fame begins in October 2011 with the publishing of the project’s whitepaper by long time Bitcoinist, Charlie Lee. Notably, Lee was a former employee of Google who had followed Bitcoin since its early days. At the time, Lee recognized the value of Bitcoin but noticed that there were some areas that if improved, could help propel large scale blockchain adoption amongst the masses. Lee’s improvements focused on reduced transaction times, fees, and the elimination of concentrated mining pools. 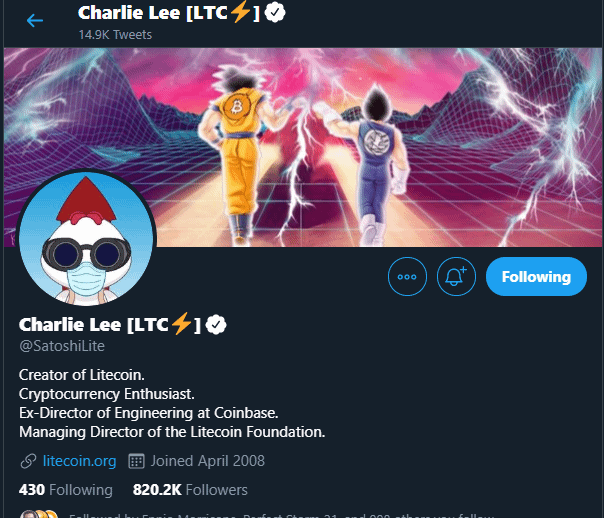 Impressively, it only took Litecoin 2 years to achieve a $1 billion market capitalization. The coin continues to dominate the market today. Notably, Litecoin reached its official all-time high of $360.93 on December 18th, 2017. Incredibly, this value represented an 8200% increase over the tokens value just a year prior. At that time, Litecoin had a market value of just around $4.40.

Lee Steps Out of The Pilot Seat

In an interesting turn of events, Lee decided to sell all of his Litecoin holdings in December of 2017. At the time, Lee explained via a Reddit post why he made the decision. He stated that he had concerns over his growing influence on the platform. In his now-famous posts, Lee is quoted stating “Whenever I tweet about Litecoin price or even just good or bad news, I get accused of doing it for personal benefit. Some people even think I short LTC! So in a sense, it is a conflict of interest for me to hold LTC and tweet about it because I have so much influence.” In the end, he decided it was best to avoid the conflict of interest that comes with his position as LTC’s founder.

How to Buy Litecoin

Luckily, buying LTC has never been easier. Due to its huge popularity, you can acquire LTC from every major exchange in operation today. The process for this approach changes slightly for each platform, but in general, it all works the same. The first step is to fill out the registration information if you are new to the platform. Once you complete your registration, you can begin purchasing LTC directly. There are two main ways to obtain this coin.

The second way to buy LTC is through the use of an intermediary. Keenly, if your exchange doesn’t offer LTC/Fiat pairings, you will need to purchase Bitcoin first. Then you can trade it for Litecoin. The great news is Litecoin is one of the most popular cryptocurrencies in the world. As such, you can trade nearly any token or coin for some Litecoin with ease.

How to Mine Litecoin

Mining Litecoin is very similar to Bitcoin. The network utilizes a consensus mechanism to ensure the state of the network remains valid. However, unlike Bitcoin, Litecoin does away with the SHA-256 consensus mechanism in favor of a different protocol known as “scrypt mining.” Proponents of Litecoin like the mining distribution method for LTC’s scrypt mining which is believed to be a fairer model. Scrypt allows consumer-grade hardware such as GPU to mine Litecoin successfully.

Critically, you can still mine LTC on a Mac or Windows PC. Miners can choose to go about the task either solo or with the help of a mining pool, something no longer possible for Bitcoin mining. While mining Litecoin today can be done with a regular home PC, it would be very slow. It’s much wiser to purchase a mining rig that is specifically designed for the scrypt mining algorithms. This strategy will provide you with better results and increase your chances of becoming the next miner to validate transactions and add them to the blockchain.

There are 14,400 Litecoins mined every day. This mining schedule equates to every 2.5 minutes, a LTC block is mined. The node that adds the next block of transactions to the blockchain receives a reward of 25 newly generated Litecoins. Similar to Bitcoin’s strategy, mining rewards half over time.  In October 2015, Litecoin rewards were halved. Notably, the halving will continue at regular intervals until the 84,000,000th Litecoin is mined.

Where Can I Store Litecoin?

When it comes to storing your Litecoin, there is no shortage of options to consider. For small daily trading activities, you can leave your Litecoin in your exchange wallet. However, it’s worth mentioning that this is the least safe way to store cryptocurrency nowadays. The next options to consider are PC or mobile wallets. Today, there are a plethora of Litecoin capable wallets available to the public. In most instances, these wallets will allow you to store your Litecoin alongside some of your other favorite cryptocurrencies.

The safest way to store your Litecoin is via a hardware wallet. Hardware wallets are specially designed devices that enable you to store your cryptocurrency without keeping your wallet online. In this way, they provide you with more security since hackers have no way to access your holdings. The main drawback of hardware wallets is their costs. In most instances, a reliable wallet (Trezor or Ledger) can run you over $100. Compared to a free mobile app, this could be a stretch for those only handling small amounts of cryptocurrency at this time.

Trading Litecoin is the same as trading any of the top cryptocurrencies. You will need to monitor the market to get a firm understanding of the current environment. Additionally, monitoring the news for Litecoin developments is another important step. For example, this week Russian President Vladimir Putin signed a law officially recognizing cryptocurrencies such as Bitcoin and Litecoin. 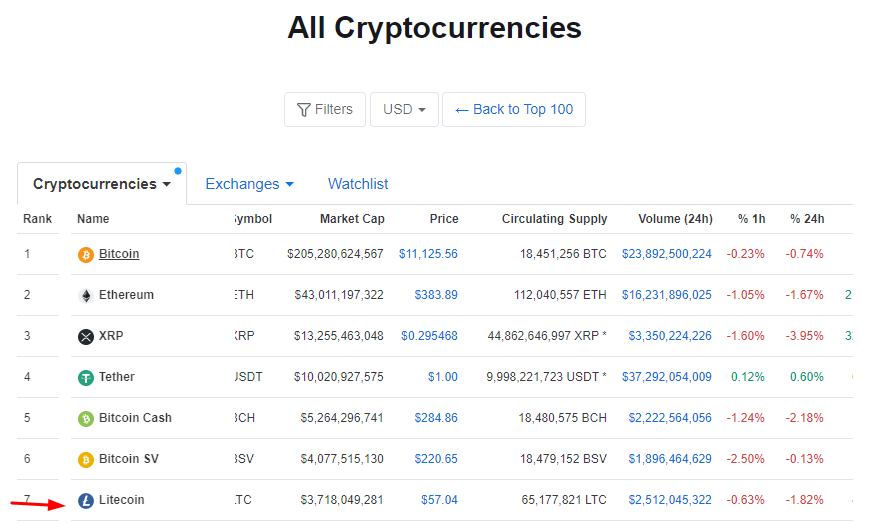 Positive news such as large scale adoption or regulatory approval usually translates directly into gains for the coin. Reversely, you can sense impending market losses when there is negative news coverage of the crypto market in general. Amazingly, analysts have reported that Litecoin has a habit of leading Bitcoin in terms of market movement. This first movement has led many analysts to monitor Litecoin in an attempt to better capture Bitcoin’s potential market movements.

Every week, Litecoin experiences some form of expansion of its network or capabilities. Just this week, The Kyber Network, a decentralized cryptocurrency exchange, listed the Ethereum-compatible pLTC token. While this project is not directly Litecoin, it clearly utilizes the coin’s reputation and value as part of the strategy. The pLTC token is a Litecoin-pegged token that lives on the Ethereum blockchain. Keenly, pLTC is pegged 1:1 to Litecoin.

Officially, the token launched on July 29, 2020, intending to unlock liquidity within the sector by enabling more cross-chain asset transactions. The development team behind the pTokens project explained the concept as yet another way for users to explore the world of decentralized finance. Today, there are several pToken in existence. All exist on the Ethereum blockchain but are pegged to underlying digital assets.

Today, Litecoin remains one of the top ten cryptocurrencies in the world. The token currently lists a market value of $57.33 with a total value of $3,736,382,516 (335,419 BTC) via CoinMarketCap. It impressive that LTC managed to remain a dominant player throughout the last 5 years, even as the overall capabilities of the crypto space began to change. Hopefully, Litecoin will continue to fill the key niche of playing the silver to Bitcoin’s gold for years to come.