Many litecoin (LTC) miners working to secure the blockchain and compete for block rewards have been unplugging their machinery following the cryptocurrency’s recent “halving” event, network data shows.

Litecoin’s mining difficulty – a coded-in measure of how hard it is to solve the mathematical puzzles used to write blocks on the network – has dropped from 15.93 million on Aug. 4, one day before the halving, to 11.40 million on Aug. 22, based on data from mining pool BTC.com. The hashing power on the network has also fallen by 28 percent.

Litecoin’s mining difficulty is designed to automatically adjust every 2,016 blocks, approximately every 4 days, to ensure the block-producing interval remains about 2.5 minutes based on the average hashing power in the current cycle.

The 28 percent difficulty drop means the current level is the lowest since April 29. BTC.com’s data estimates that difficulty will continue to decline by another four percent at the next adjustment date, which is due in three days.

The 4-day average hashing power on the litecoin network has also declined from 456 terahash per second (TH/s) recorded on Aug. 4 to 326 TH/s on Aug. 22 at 23:54 UTC, when the latest difficulty adjustment occurred – a 28 percent drop. 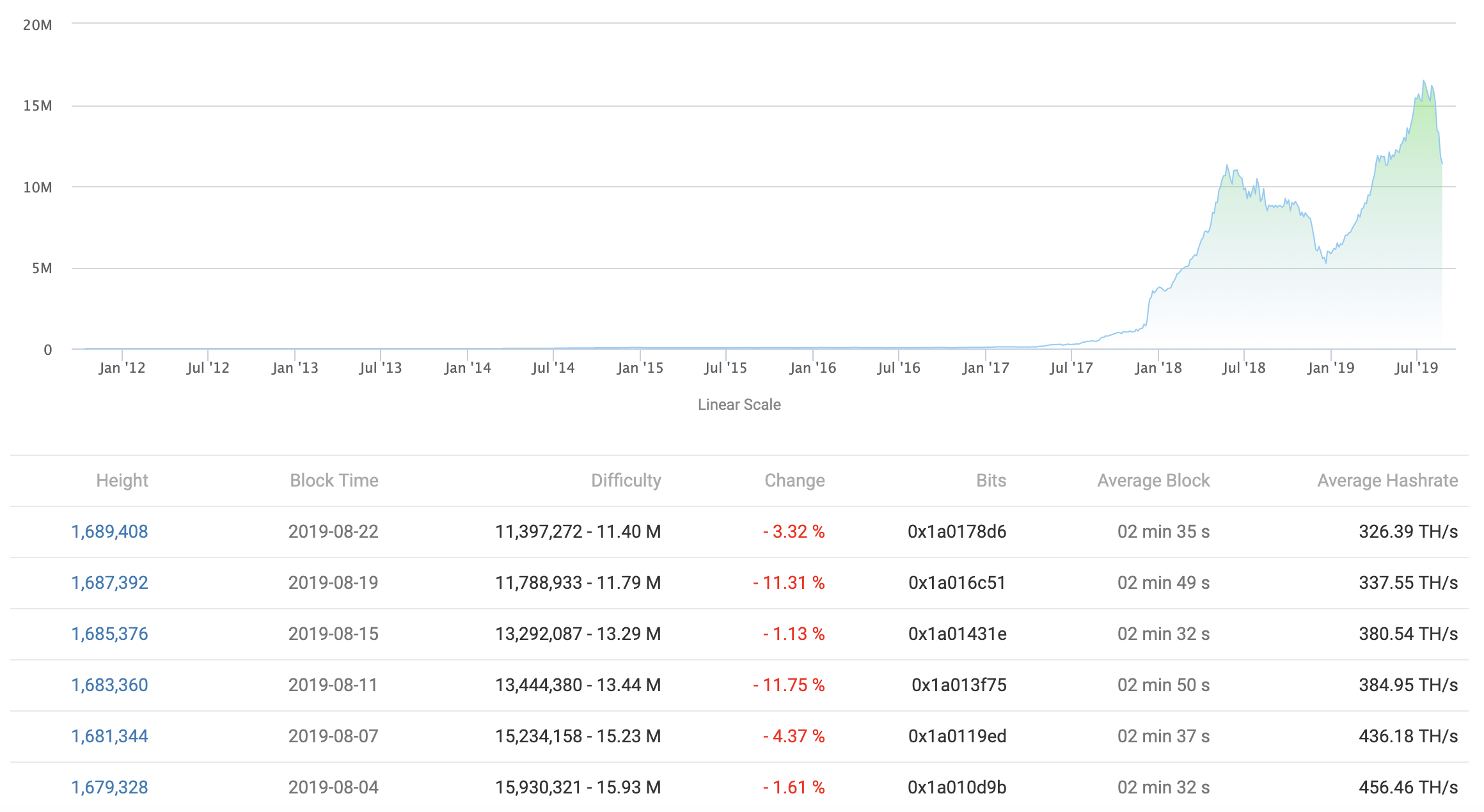 Data for the three-day hash rate distribution indicates that currently miners connected to the mining pool Poolin account for 23 percent of the network’s total computing power, followed by those connected to f2pool and Bitmain’s Antpool.

The decline of mining interest is perhaps not surprising as the halving event on Aug. 5 reduced litecoin’s block rewards from 25 LTC to 12.5 LTC, leaving existing mining equipment with a significantly decreased profitability.

F2pool’s data shows the most profitable miners on the litecoin network, made by InnoSilicon and FusionSilicon, now have a profitability of between 10 to 20 percent, as LTC’s price has dropped from $93 before the halving to around $74 at press time.

Assuming the electricity needed to power the miners costs $0.04 per kWh, these models are estimated to bring home a daily profit between $0.20 and $0.50. At the current price of LTC, older mining equipment like Bitmain’s AntMiner L3 and L3+ would be making negligible profit at just over $0.01 a day, f2pool’s index shows.

Litecoin is the fifth largest cryptocurrency by market cap currently.