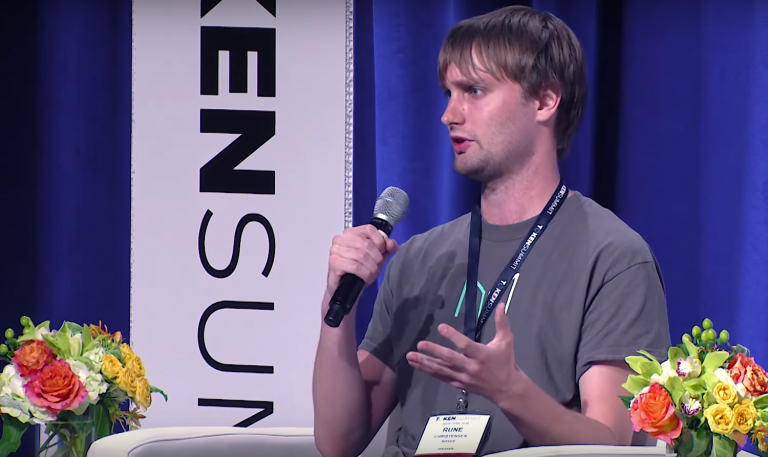 Booming demand for stablecoins in DeFi’s yield farming landscape is breaking the peg for Ethereum’s only crypto-collateralized stablecoin. The Maker community is searching for a solution to drive the peg back down, but not everyone is sold that these solutions will work long-term.

MakerDAO’s dai, which uses ether, stablecoins and tokens as collateral to retain a $1 price point, is trading above its targeted peg. At time of publication, dai is trading at $1.04.

It’s not uncommon for dai to fluctuate above or below this price point. But the peg’s recent upwards drift, which continues a trend that began in March as market volatility led to a trading flight into stablecoins, is likely in response to growing demand for stablecoins in Ethereum’s blossoming yield farming market.

“The whole yield farming craze – and explosion in DeFi in general – has really impacted the peg a lot in the short run. The community responded by setting all rates to zero. The demand for dai is so extreme that even these zero rates don’t make a difference,” Rune Christensen, MakerDAO’s founder, told CoinDesk.

The supply of stablecoins in DeFi lending markets has indeed exploded in 2020. Before SushiSwap migrated its pools out of Uniswap, roughly $340 million of Uniswap‘s $1.43 billion in total value locked (TLV) was split between USDT, USDC and dai. DeFi’s largest lending pool, Aave, has stablecoins amounting to roughly $620 million of its overall $1.7 billion TLV.

As demand for centralized, fiat-backed stablecoins like USDT, USDC and others surges, Maker DAO’s dai has found itself caught up in the demand’s undertow. Per DeFi Pulse data at the time of publication, $354 million worth of dai is floating around in liquidity pools on Uniswap, Yearn, Compound, Curve, Balancer and SushiSwap. This $354 million is over three-fourths of dai’s 434.4 million circulating supply.

Such terrific trading demand has sent dai’s peg northward to $1.03 at the time of publication. With DeFi farming aggravating a peg slippage that has affected dai for the better half of the year, Maker’s community is searching for ways to alter the protcol’s monetary policy to drive the peg back down.

But not everyone is sold on which policy switch makes sense.

The makings of MakerDAO

Dai works like this: Borrowers mint dai by placing some other crypto asset (like ether or other stablecoins) into a smart contract “vault” as collateral. MakerDAO, the protocol, charges these borrowers a “stability fee” (SF), a sort of interest rate that the borrowers must pay back in dai to pay down their debt.

On the other side of this are the dai holders, who get paid a “dai savings rate” (DSR) for staking their dai in a smart contract. This DSR is another interest rate of sorts, rewarding dai holders in-kind for their savings.

The stability fee on (most all) Maker vaults has been 0% since Black Thursday, March 12. On this fateful day, when assets across the board tanked tremendously, dai began trading well above its $1.00 peg as traders scrambled to hedge the market bloodshed. Much like low rates for centrally planned monetary systems, the 0% SF for dai was an effort to incentivize dai borrowing to grease the markets with liquidity and so drive the peg back down.

The 0% SF wasn’t enough to fix the issue, though, and the community voted to raise it for most vaults to 2% because, in Christensen’s words, “the community was taking on a lot of risk but was not being compensated for that risk.”

Even with this motley array of coins collateralizing more dai, the yield farming craze is keeping the stablecoin above its 1 buck peg, so the community is mulling over other – and in some cases, more extreme – measures to re-align dai with its $1 mandate.

One solution involves returning to square one, in a way, by tinkering with Maker’s primary USDC vault.

The Maker community originally voted to add USDC collateral immediately following Black Thursday as an emergency measure to restore the $1 peg. Now, some community members are in favor of lowering the collateralization requirement for the USDC-DAI minting pair from 110% to as low as 101%. This would mean users would have to lock 101 USDC (not 110 per current rules) to mint 100 DAI.

In a MakerDAO forum discussion, Aaron Bartsch asked community members if they wanted to “further reduce the USDC-A collateralization ratio [the “A” refers to USDC’s primary vault on the Maker protocol] to further incentivize dai minting with USDC to ‘arb’ the peg down.”

In his conversation with CoinDesk, Christensen mentioned that a 1.01 CR would make the most sense as it could “put a price ceiling on dai.” Since DAI is trading at $1.04, every 101 USDC deposited into the vault would generate $104 worth of dai; this, in theory, should be enough to incentivize traders to arbitrage the difference and thus drive the peg down. A CR higher than DAI’s current price wouldn’t produce enough incentive.

Not everyone is down with the fix, though. Questions were floated regarding how a liquidation engine for such a narrow CR would work (liquidations for USDC vaults are currently turned off).

Others questioned whether the dai hypothetically minted from such a change would even dilute the traded supply enough to drive the peg down. Each Maker vault has a “debt ceiling” that caps how much dai can be borrowed at any given time. Currently, USDC’s primary vault has a 40 million DAI ceiling with $33 million locked.

“No one is arbing the peg because the debt ceilings are too low to do so effectively,” MakerDAO member rileyjt said in the forum discussion. “If you mint all the dai possible and market sell it on Curve, it won’t even go below the peg on that one DEX. Let alone the entire ecosystem.”

“If it’s not enough, then the debt ceiling will have to be continually increased,” Christensen added in our conversation.

Another proposal, dubbed by its author as Maker’s version of “quantitative easing,” also looks to USDC collateral as a solution – though in a more creative way.

Sébastien Derivaux proposed the “creation [of] a USDC-M vault with no stability fees and a liquidation ratio of 100%” that “only whitelisted address from Maker can use.” In practice, approved users would buy USDC on the market with a dai flash loan, stake this USDC in the USDC-M vault to mint dai, pay back the flash loan, and repeat the process until there’s enough new dai in the market to drive the peg down.

Critics of this proposal noted that it risks abstracting Maker too much for the average user and resembles the credit gymnastics of legacy finance.

Others went as far as to say this would tarnish Maker’s reputation entirely.

“You deposit 101K USDC and want 101K DAI in return. This is called printing dai,” user Planet_X protested. “In this plan Maker is set up as a trader in its own currency with more privileges (a special USDC pool and exchange mechanism) than no other market maker has access to.

“If the community uses such a solution it will cause a massive blow to credibility. You will probably be able to fix the peg in the short run but at the cost of sinking Maker karma below that of Tether.”

Derivaux agreed there is a “philosophical (and product position) argument against [it],” but still considers the proposal worthwhile and preferable to lowering the USDC-A vault’s CR.

Both proposals will be put to an on-chain vote this coming Monday to see if they hold water with the rest of the Maker community.

Even if they are passed, the protocol’s inventor has his doubts as to whether or not they will work in the long run. He’s also wary of relying too much on a centralized stablecoin like USDC, whose addresses can be blacklisted and coins frozen. Relying too much on USDC creates a central point of failure, and loading vaults with too much essentially amounts to “asset capture” if the competing stablecoin undergirds too much of dai’s collateral.

Instead, Christensen favors a multi-asset approach. He believes the only way to fix the broken peg in the long run is to do what Maker did when dai’s price went skyward following Black Thursday: add more collateral.

This is the only feasible solution to Christensen, who noted that other policy tweaks have not delivered long-term results.

“They set the stability fee to 0% on everything and it didn’t fix the peg, so I think that shows that there’s no other option but to onboard more collateral.  Possibly the stablecoin solution works, but it’s not exactly a long-term solution, it’s a medium-term solution.”

Ironically, demand for dai hasn’t been damped even with its price instability, as evidenced by the throngs of DeFi degens who are willing to stomach the premium to farm food-themed tokens.

When asked about the danger of a floating dai peg to the project’s longevity, Christense said that, even if it’s “not the end of the world in the short term,” that “in the longer term it doesn’t align with the original goal of Maker.”

Still, he also holds that the dai’s peg is not the primary problem for its users; it’s Ethereum’s blockchain, bloated with yield farming transactions, requiring exorbitant fees. Scaling Ethereum, then, is “part of the bigger picture” to Christensen as the MakerDAO community searches for its own way to “distribute risk” away from centralized stablecoins like USDC into other collateral, like the token additions currently proposed and “tokenized real world assets” down the line.

So at a time when Ethereum is facing its own issues regarding scaling, its (arguably) flagship DeFi protocol in Maker is wrestling with how to stay true to its original mandate: creating a decentralized stablecoin for a decentralized financial landscape.

Relying too much on USDC (or other stablecoins) for collateral may compromise this future, so that’s why Maker’s creator believes the solution to this challenge comes from adding as many collateral pairs as possible.