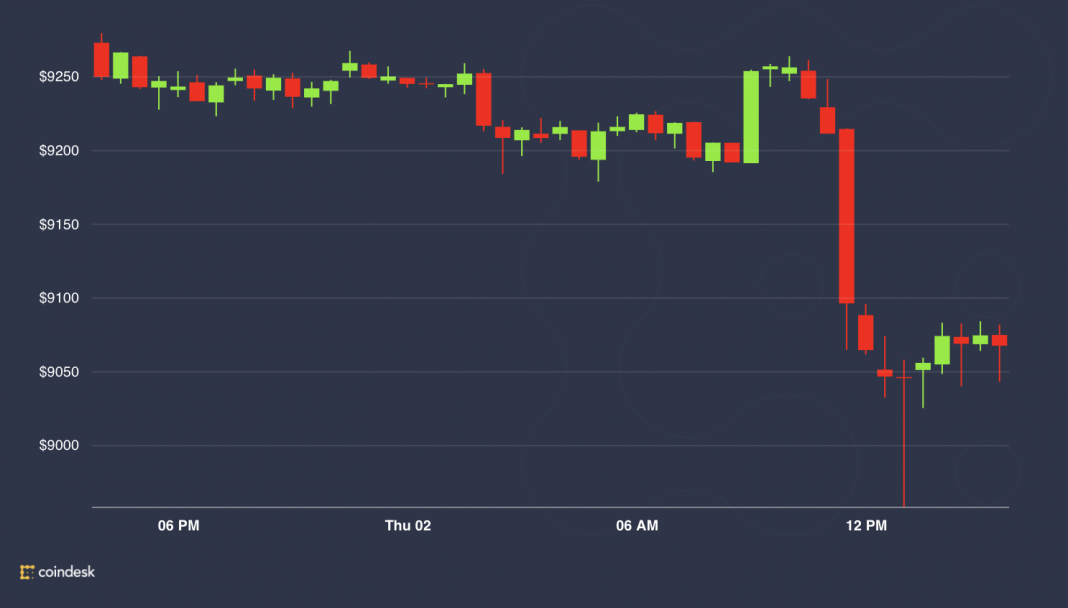 Bitcoin broke below $9,000 Thursday afternoon as the leading cryptocurrency has continued to trade in a tight range just above $9,000 for several weeks.

Despite the brief 3% afternoon drop, however, the cryptocurrency markets continue to stay eerily calm as volatility drops and traders continue to expect a big move. Bitcoin was changing hands at around $9,060 as of 20:00 UTC (4 p.m. ET).

Ether, the second-largest cryptocurrency by market capitalization, dropped 3%, trading around $225 as of 20:00 UTC (4 p.m. ET), according to Coinbase.

Bitcoin teased bearish traders Thursday with a 3% dip from $9,250 to $8,930 in afternoon hours. The move sparked a series of liquidations on BitMEX, spiking to $30 million after the afternoon price move, according to Skew. Liquidations had been fairly flat for several days on the largest bitcoin derivatives platform.

Despite the afternoon drop, spot trading volumes were relatively stable relative to the preceding few days. Coinbase volume, for example, just barely edged out its Wednesday’s volume, reporting a total of $78 million traded.

Norwegian crypto investment firm Arcane Crypto is planning to list on Nasdaq Nordic’s alternative stock exchange, CoinDesk reported Thursday. Arcane plans to issue 6.6 billion new shares – each at half a U.S. cent – to fund a $32 million take over by Swedish firm Vertical Ventures, which is facilitating the listing.

As bitcoin dipped, some of the darlings of the equities markets continued to soar. Tesla made a new all-time high for the second consecutive day Thursday, climbing to $1,228 in early trading hours. The technology stock opened 5% higher than its Wednesday close as its bullish momentum continues with ferocity. Zoom also made a new all-time high, trading at just below $264 during afternoon hours.

Cryptocurrencies in general were almost all in the red Thursday, according to Messari. The only digital asset categorized as a currency with a positive 24-hour return, according to its methodology, was monero (XMR) up 2.5%.

In commodities, gold gained 0.5% on the day after recovering from 1% drop during afternoon trading hours. Crude oil gained more than 2%.