It has been a big year for crypto. Even though price drops and declines in trading volume may have characterized the past few weeks, Simon Peters, a market analyst for social trading firm, eToro, would like to remind traders to take the long view.

Despite the fact that “September was subdued, following an energetic August,” Peters said that “it is worth noting that every coin has performed positively in 2020, with software platforms such as Ethereum and Tron seeing respective gains of 160% and 84%.”

Indeed, “cryptoasset trading activity may be down for September, but they remain very much on the up when compared with 2019.”

On eToro, September Selloffs Pushed Trading Volume down across the Board

A report on eToro’s monthly trading figures found that in spite of September’s declines, Bitcoin, Ethereum, and XRP are still on top: the assets remained the platform’s top three most popular cryptocurrencies for the second month in a row. 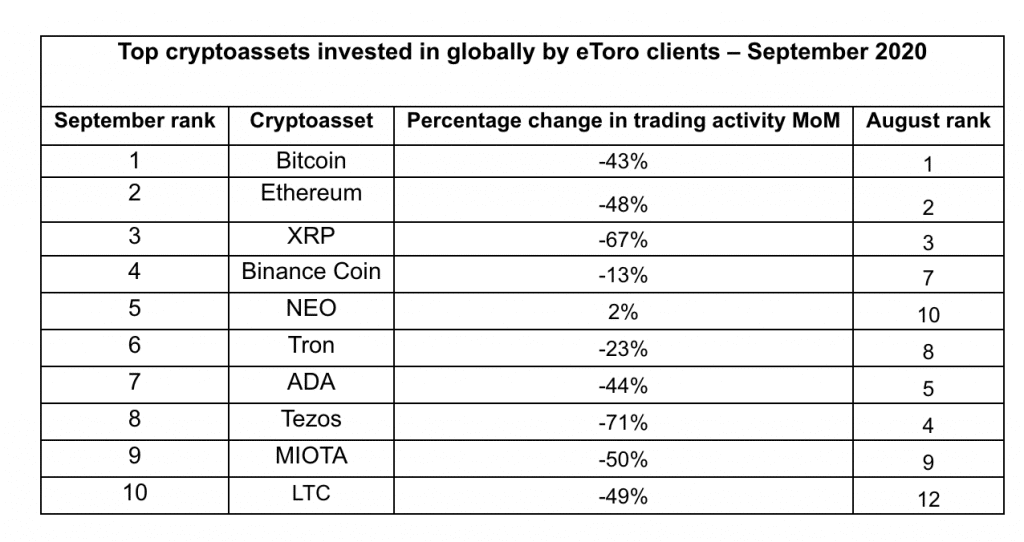 At the same time, Binance Coin (BNB) continued its climb up the ranks, with a move from the seventh to the fourth most-traded crypto asset from August to September.

Ensure Your Payments Are Safe and Secure with ShefapayGo to article >>

However, trading volume was down across the board. Only one asset, NEO, saw an increase in trading that pushed its levels into the green. “The smart contract platform was traded 2% more in September than in August, an increase that pushed the crypto asset up to fifth place,” the report stated.

Meanwhile, Tezos, which traded handsomely on eToro over the summer, dropped four places from August to September, eventually landing in eighth place. The descent marks the first time that TZX has fallen below the top five most popular assets “since the inception of the eToro monthly cryptoasset reports.”

Indeed, “Ripple’s XRP and Tezos were hit hardest by the dip in trading activity,” Mr. Peters explained, “whereas NEO, Binance Coin and Tron (TRX) fared slightly better. Going forward, cryptoassets TRX and ADA are likely to see upticks in activity as users look to take advantage of the staking rewards now available by holding these crypto assets on eToro.”

”Investors Were Clearly Looking to Take Some of These Profits.”

Mr. Peters explained that the decline in trading volume (and, perhaps, in price) could be explained by a desire to cash out before the end of Q3.

“With some exceptional gains made across a number of crypto assets over the last few months, investors were clearly looking to take some of these profits,” he said.

“There is reason to be cheerful for a number of crypto assets, however, with Bitcoin, in particular, displaying some positive on-chain metrics. Investors, therefore, could be holding cash before again dipping into bitcoin or other crypto assets should they feel they are embarking on another bull run.”

But, are further sell-offs in the future? “Whilst September was quiet, the sector never stays subdued for long, and an increase in volatility across the asset class could see trading activity pick up.”