I’ll just say this flat out … 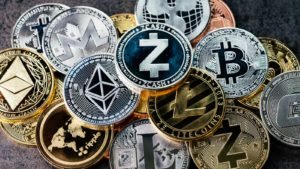 This could be the last time we see the world’s largest cryptocurrency at prices this cheap.

I can’t guarantee that, of course, but it would not surprise me at all.

Less than a month ago, bitcoin hit a 52-week high above $12,300 following a blistering surge from below $9,000 in late June — a 38% rally in less than two months! Now it’s taking a breather as investors lock in gains.

Bitcoin’s smaller peers, known as altcoins (alternatives to bitcoin), have also pulled back.

Stocks and cryptos don’t always trade in sync, but this pullback has coincided with the market’s action — as air has come out of high-flying tech stocks after they soared to all-time highs.

Regular readers may get sick of me saying this, but it’s my job: Pullbacks happen. They happen in stocks, in cryptos, and in any other tradeable asset.

Pullbacks are normal, and even healthy.

And if the long-term hypergrowth trend is favorable, they are great buying opportunities…

Regular MoneyWire readers also know how bullish I am on bitcoin, so I’ll get right to the point.

Bitcoin is ridiculously cheap right now. I’ve been adding to my own portfolio throughout the pullback.

And yes, the long-term outlook for massive growth and profits in bitcoin and altcoins is as bullish as ever.

I recently debated with my colleague and friend — not to mention esteemed growth investor — Louis Navellier about bitcoin’s potential. He thinks the Dow will get to 40,000 before the crypto does. I expect the Dow to get to 40K, too, but I think bitcoin could easily jump 4X and get there first.

The thing is … I think bitcoin has far more upside than just $40K over the long term. I fully expect it to rise to $100K — a nearly 10X return from today’s prices!

I know. Some people can’t get their heads around that. But it all boils down to the massive potential that bitcoin and select altcoins hold as they go mainstream among consumers and investors.

Software has become a part of our everyday lives the last few decades, so I think we sometimes overlook what that means. Software programs are one of the greatest forces for wealth creation on Earth. They make our lives and our businesses easier and vastly more efficient.

Think of Bill Gates’ Microsoft (NASDAQ:MSFT) … or Jeff Bezos’ Amazon (NASDAQ:AMZN). A great software program can help you make smart business decisions, find travel deals, talk to loved ones, get a cheap ride home, calculate your taxes, and more. They can even transform industries. It’s no wonder they kicked off one of the largest, fastest accumulations of wealth in human history.

And just like software programs have changed our lives over the last 30 years, many of the blockchain technologies and cryptocurrencies will also improve our day-to-day lives in the future.

They are not some sort of fantasy internet money. They eliminate the middlemen from industries like banking… finance… real estate… insurance… and more. This is known as decentralization. Blockchains are incredibly difficult to tamper with, thereby offering the reliability that trusted institutions like banks and large corporations once did.

Cryptocurrencies are also increasingly becoming the hedge of choice against currency devaluation, which is especially important in the current environment. As governments around the world pump money into their economies, the greater supply automatically puts pressure on traditional currencies.

Cryptos are a fantastic hedge because nobody can manipulate their production. Bitcoin and other select altcoins have a fixed supply written into their code. That makes them an excellent store of value.

Bitcoin and cryptos are going mainstream and becoming an increasingly sought-after hedge since a major catalyst recently set the stage for a massive run in the entire industry. As we’ve talked about, bitcoin underwent its third “halvening,” or “halving,” back in May. The supply of new coins coming onto the market got cut in half.

After the prior two halvenings, bitcoin surged quadruple digits in the 12-18 months that followed. And select altcoins outperformed bitcoin during these periods. A lesser-known coin called Primecoin soared 3,708% between July and November 2013!

So yes, yes, and yes. I see this as a big buying opportunity in bitcoin — I’ve been buying more myself — and in some of the best-positioned altcoins.

Several of the 11 elite altcoins in my Ultimate Crypto newsletter are now trading below the limits I recommend. Those coins are sitting on average gains of nearly 110% since January 7 … with one up nearly 500% … and I expect more to come. The innovation and potentially life-changing profits in the right altcoins is truly stunning. It remains as big as you’ll find anywhere in the market.

But you don’t want to wait. It’s only a matter of time before prices power their way higher — and $10,000 bitcoin will be but a memory.

On the date of publication, Matthew McCall did not have (either directly or indirectly) any positions in the securities mentioned in this article.

Matthew McCall left Wall Street to actually help investors — by getting them into the world’s biggest, most revolutionary trends BEFORE anyone else. Click here to see what Matt has up his sleeve now.