A new study of 140,000 crypto addresses finds that few accounts are needed to form majority ownership of many coins. More than half of all LTC is held in just 189 non-exchange addresses, and on average, the top 100 ERC20 tokens are majority-owned by just 34 addresses. Almost 1 in 4 tokens had a majority owned by the project founder. In contrast, you need over 1,100 of the top addresses to control the majority of bitcoin cash.

Whales Still Dominate Much of Crypto

Clovr, a research-focused cryptocurrency company, has analyzed the wealth distribution among 140,000 non-exchange addresses from four major cryptocurrencies and the 100 most valuable Ethereum tokens. The researchers found that surprisingly few accounts are needed to form majority ownership of many coins and that some currencies have more unequal distribution of wealth now than they did in 2018.

Some of the richest addresses are owned by exchanges, which hold the wealth of many people. To find a close approximation of individual whales, the study removed all addresses known or predicted to be owned by an exchange. The researchers identified addresses that belonged to 41 exchanges using wallet nicknames associated with each address and predicted which anonymous addresses were owned by exchanges by cross-referencing address names across currencies. 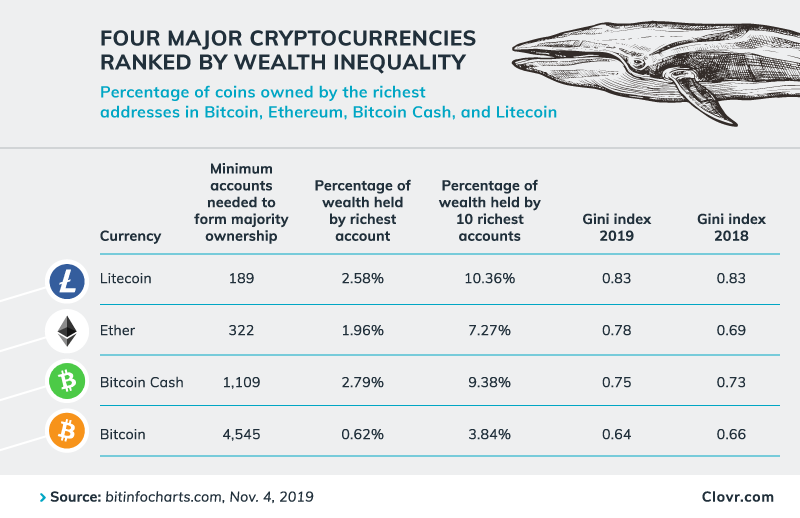 The study investigated the wealth distribution of four major cryptocurrencies – bitcoin, ether, bitcoin cash, and litecoin – and found that last had the most centralized wealth. Just 189 addresses are needed to own a majority of all LTC. The 10 richest litecoin accounts owned a tenth of all LTC wealth.

“The fact that a few whales hold as much wealth as many small fry is true of all financial realms. It’s a hot topic among cryptocurrency enthusiasts because the lower liquidity and higher volatility in cryptomarkets mean whales can make bigger waves,” the researchers explained. “Concentrated ownership of wealth creates serious points of failure in a system designed to be robust through decentralization. This is perhaps most true for centralized exchanges, the singular custodians of many people’s wealth. Such failure can and does happen. The bigger the whale, the bigger the target – hackers and scammers hunt with big harpoons.”

ERC20 tokens, those using the Ethereum platform, generally exhibit a lot of inequality. The researchers found that among the 100 Ethereum tokens with the highest market caps, the average number of addresses holding a majority was just 34. But the size of the majority group varied widely from token to token. Twenty-four of the 100 largest tokens were majority-owned by one address, almost always the token founder’s. 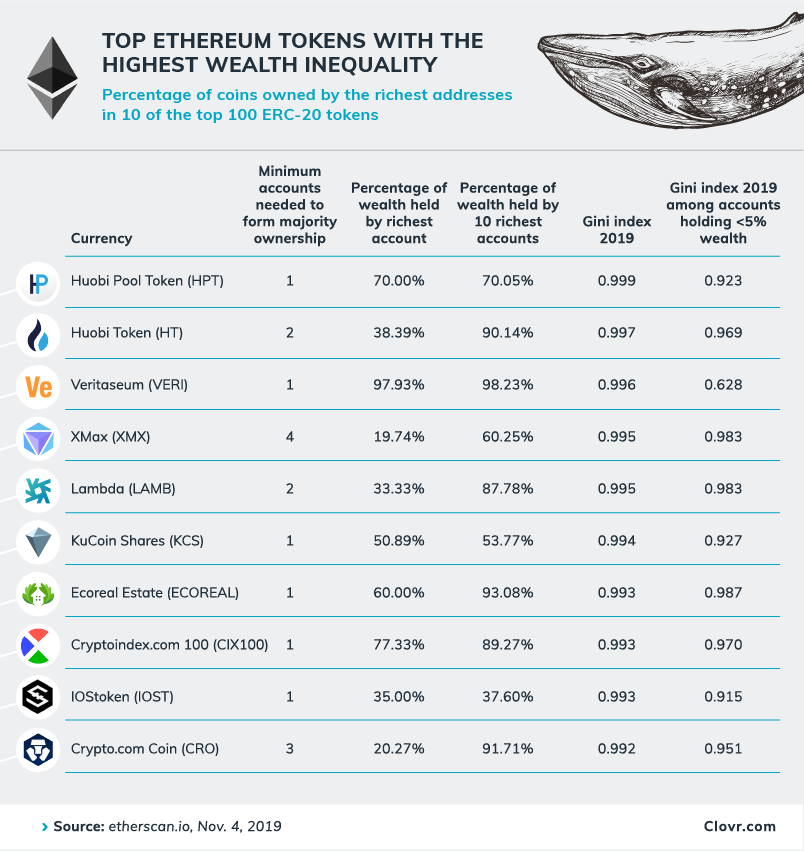 This inequality is often due to the way the availability of tokens is controlled by the founder, but having such centralized wealth brings its own risks. The initial coin offerings (ICOs) used to fund some tokens were identified as pump and dump scams, enticing investments that boosted the token’s value, only for the founder to cash out on the large number of tokens they withheld.

However, according to the study, the distribution of wealth in a token or coin may mean different things depending on how the currency originated. Huobi’s tokens had the highest wealth inequality of all ERC20 tokens, according to the analysis, but Huobi token was not funded via an initial coin offering and, therefore, possibly didn’t expose investors to the same level of risk.

To help understand which tokens are most likely to have very unequal distributions of wealth — a sign that a market could potentially be easily dominated by few individuals or manipulated by its founder — the researchers related the “top-heaviness” of tokens’ wealth distribution to the tokens’ market capitalization. A top-heavy wealth distribution would be one where large amounts of wealth were held by a small number of addresses – defined here by the log ratio of the mean address wealth to the median address wealth.

The higher a token’s market cap was the more likely the distribution of wealth was evenly spread compared to other tokens. In other words, the tokens that showed the greatest concentration of wealth in the fewest addresses were all tokens that have relatively small market capitalization – $100 million or less, in fact. 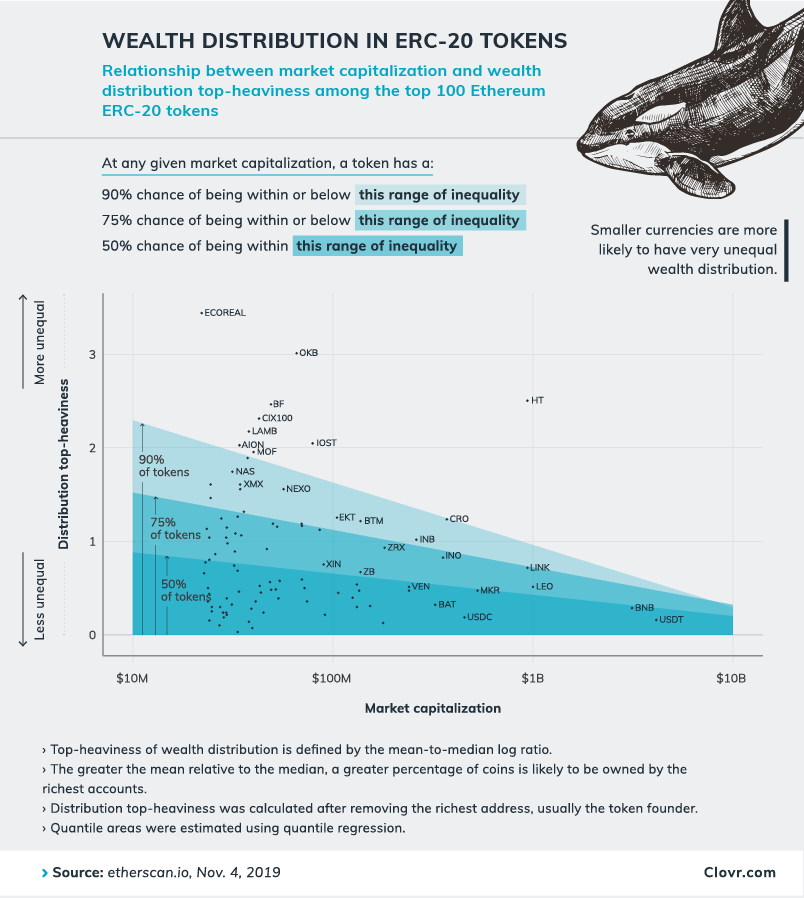 “These smaller token projects are lucrative investments for some because the returns can be monumental, but potential rewards reflect the risk,” the researchers warned. “Investors should do their research and consider many factors before buying any cryptocurrency. Just make sure one of the things you consider is how big the whales are in your sea – either you can swim in the current, or you’ll be swept along in their wake.”

What do you think about a small number of whales controlling so much of the crypto assets ecosystem? Share your thoughts in the comments section below.

Verify and track bitcoin cash transactions on our BCH Block Explorer, the best of its kind anywhere in the world. Also, keep up with your holdings, BCH and other coins, on our market charts at Bitcoin.com Markets, another original and free service from Bitcoin.com.